Back on Topps' Radar: Hawk Taylor

Now back to my series named "Back on Topps' Radar". I planned to include three of my last 4 posts (Bob Tiefenauer, Julio Gotay, and John Tsitouris) in that series, but as it turned out, their 1968 card was also their last.

Hawk was signed by the Milwaukee Braves in 1957 as a bonus baby, requiring him to be on the major-league roster for the rest of the season. His debut was in early June. Later he spent time with the Braves' minor league teams, and rejoined the Braves in 1961. Since the Braves already had Del Crandall, Joe Torre, and Bob Uecker at catcher, Taylor as used as a spare outfielder for his last 3 seasons in Milwaukee. 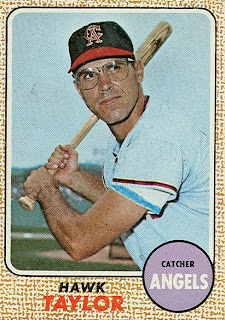 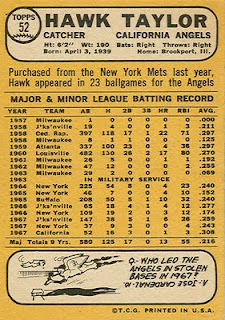 After the 1963 season, he was sold to the Mets. The 1964 season was Taylor's first shot at significant playing time, as he appeared in 92 games and had over 200 at-bats. The Mets' entire catching staff consisted of 3 sub-par backups: Jesse Gonder, Chris Cannizarro, and Taylor. Even with that poor competition, Taylor was still 3rd string.

Hawk spent most of 1965 with the Mets' triple-A team in Buffalo, as Cannizarro took over the starting catcher's job, and the backup roles were filled by suspects such as John Stephenson, Jesse Gonder, and Jimmie Schaffer. Even coach Yogi Berra caught a few games.

In 1965, Taylor split time between New York and their triple-A team in Jacksonville. With the Mets, he was still the 3rd string catcher, this time behind newcomer Jerry Grote, and John Stephenson. Taylor also played a few games at first base.

In early 1967, he was traded to the Angels, where he filled a now-familiar role: 3rd string catcher. He spent all of 1968 in the minors, before the Royals scooped him up in the rule 5 draft.

He played for the Royals for parts of 2 seasons, as a pinch-hitter and backup outfielder in 1969, and as a pinch-hitter in 1970. Taylor was traded to the Red Sox prior to 1971, but did not play in the majors after 1970.
Posted by Jim from Downingtown at 8:18 PM

One of my favorites as a youngster. I always rooted for the underdog.