Joe was signed by the Phillies in 1961, and began his career as a relief pitcher with their Miami Marlins farm team in 1962. After another season in Miami, he moved up the ladder and eventually made his major-league debut with the Phillies in June 1966. Verbanic pitched in 17 games for the Phillies that season, but was traded to the Yankees that December for veteran pitcher Pedro Ramos. 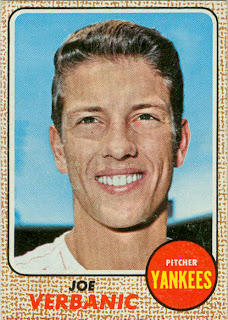 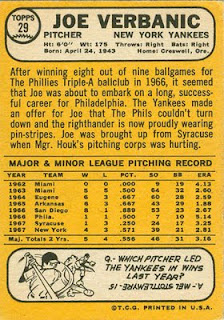 Verbanic missed the entire 1969 season with arm troubles. When he returned in 1970, his career was essentially over. Joe pitched 7 games for New York, and 15 games for AAA Syracuse. He also missed most of the following season, only pitching 5 games for Syracuse. Verbanic wrapped up his career in 1972, back with the Phillies' AAA team for a 39-game stint.

I often thought that Topps should have made another 1966 Phillies Rookies card featuring Verbanic and rookie pitcher John Morris. (Morris was traded to the Orioles for pitcher Dick Hall, and later surfaced on a 1969 card as a Seattle Pilot.)

Here's an internet page for Verbanic.
Posted by Jim from Downingtown at 9:40 PM 2 comments:

In his rookie season of 1964, Sammy led the bullpen with 52 games, 122 innings, and 14 saves. The following season, he joined the rotation and compiled a 22-10 record, which, along with Jim Maloney's 20-9 gave the Reds a nice one-two punch. 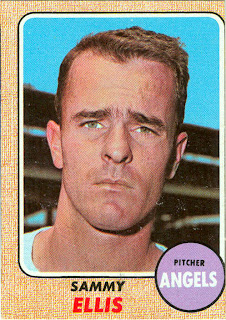 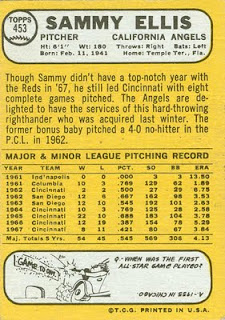 After slipping to 12-19 in 1966 and 8-11 in 1967, Ellis was shipped off to the Angels for pitcher Bill Kelso. His one season in California was more of the same (9-10 record), and Sammy was traded to the White Sox in January 1969 for outfielder Bill Voss. After only 10 games with Chicago, he was traded to the Indians for pitcher Jack Hamilton, and was assigned to triple-A for the remainder of the season.

Ellis' final major-league game was in June 1969. His last baseball card was also in 1969. He spent the next 2 seasons in the minors before retiring.
Posted by Jim from Downingtown at 11:17 PM 2 comments:

Here are the rest of my 1969 baseball stamps (well, except for the Padres' Larry Stahl, but he didn't fit into one of the group rectangles!) I got all these in 1969, and they've been sitting in glassine envelopes ever since.

I have no idea who I'm missing (except for the Phillies' Tony Taylor). It's weird that I have no stamps from the 2-time NL champion Cardinals, nor the Yankees, Reds, Dodgers, Braves, Red Sox, Orioles, Angels, Astros, Expos, Royals, or Pilots. 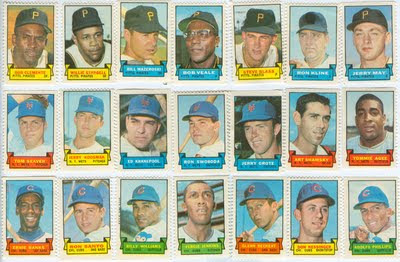 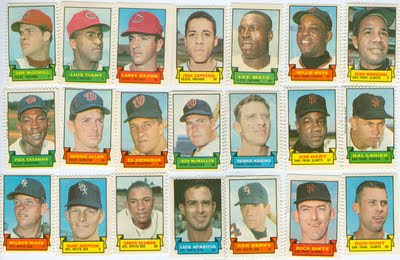 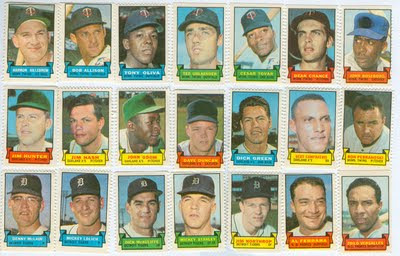 Posted by Jim from Downingtown at 9:25 PM 7 comments:


I was just reading the latest post by Jim on his Phillies Room blog where he made a reference to the 1969 Topps baseball stamps. I forgot that I had these until reading his post. When I located them, I didn't find any doubles, but I have 76 of these stamps from various teams, mostly Phillies, Pirates, Cubs, Twins, and Athletics. I wonder why out of 76 stamps, I have none from the Red Sox, Yankees, Orioles, Angels, Cardinals, Expos, Astros, or Reds?


Here are the Phillies (I seem to be missing the Tony Taylor stamp that Jim referred to): 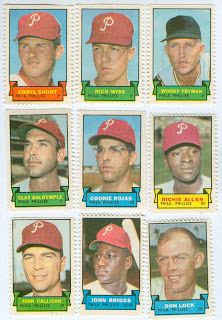 And here are 3 recent ex-Phillies. (Cater is actually about 4 years removed from the team, but Topps is still showing him in a Phillies uniform.)