Here is the position breakdown of the 485 player cards:

That's a total of 451 cards. The remaining 34 cards featured players at more than 1 position. Below is a sample of each position: 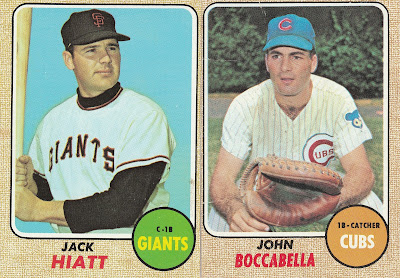 These are the only 2 players having a C-1B or 1B-C position. 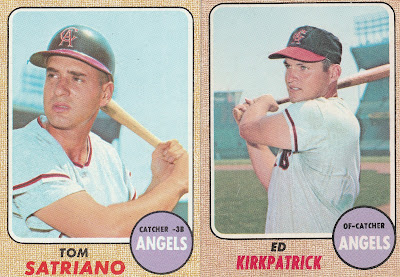 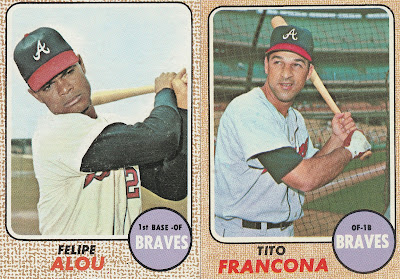 Felipe Alou appears again as a 1B-OF (along with Lee Thomas, Clarence Jones, and Mike Hegan).  His teammate Tito Francona has the opposite position, as does Chuck Hinton. 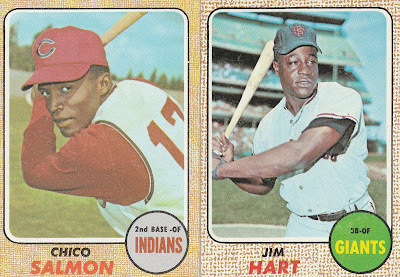 Chico Salmon is one of two 2B-OF in the set (along with Bob Savarine).  I wonder why Topps chose not to abbreviate Salmon's and Alou's positions, like they did with the others?  Jim Hart and Danny Cater are the only two with 3B-OF. 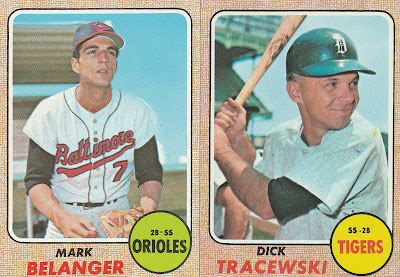 In the 1967 set, Topps botched Orioles' shortstop Luis Aparicio's position, naming him as "INFIELD".  This year, they did it again to the Orioles' shortstop.  Mark Belanger was the starting shortstop all season (with Aparicio having been traded), yet they have him as 2B-SS.  (No other Orioles' player was designated as 'SS'.)

In the last set, there was only one player with this position, but now there are 6 (Belanger, Phil Gagliano, Nate Oliver, Tim Cullen, Frank Quilici, Wayne Causey). As in the previous set, Dick Tracewski is the only SS-2B. 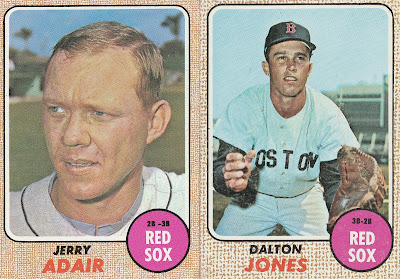 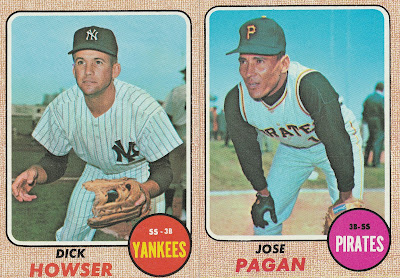 These are the only two players in the set with these positions. 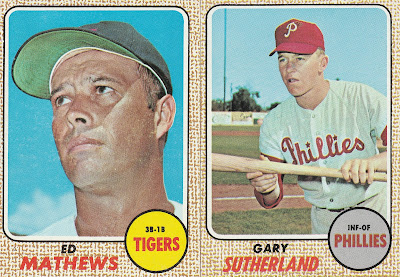 There are 3 players having the dreaded INF-OF position (Gary Sutherland, Woodie Held, and Frank Kostro.)  Topps missed the boat here.  Sutherland was a semi-regular at both shortstop and left field in 1967, and played no other positions.  Topps could have had a rare "SS-OF" position if they were paying attention.

I noticed a few other things about this set while I was gathering the above information.  I have already railed about the uneven distribution of cards among the teams in this set, as well as the absence of a Giants Rookie Stars card.

I found that there is no card for an Indians' 1st baseman (because Topps refused to make any cards for Tony Horton), and also no 2nd baseman for the Giants (nor anyone remotely close, like an infielder or a combined position).  Tito Fuentes seems like a candidate for that card, but he is missing from the set.

I also found that the Astros have FOURTEEN pitchers, while most other teams have 9 to 11. Topps also went overboard with FOUR catchers for the Athletics, while everyone else has 2 or 3.

I started off with Jackson, May, and Johnson. Now post #4 - The Robinsons: 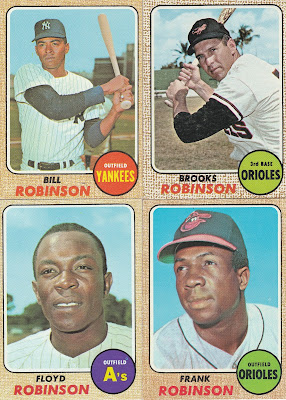 Posted by Jim from Downingtown at 1:27 AM No comments: 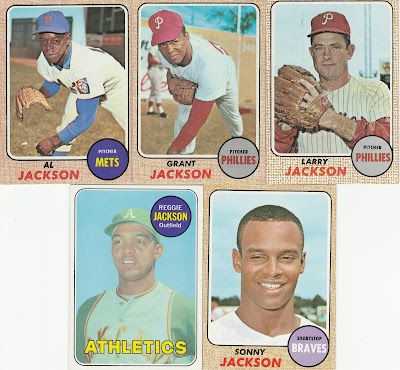 I'm starting off with all the Jacksons. (Reggie would have had a card in the 1968 set, if not for Topps' ineptitude.)
Posted by Jim from Downingtown at 6:10 PM No comments: