Here is the final card for Darrell Sutherland (#551). Darrell was signed by the Phillies in 1963, one year before they also signed his brother Gary. (Darrell's picture is 5 years old, as it shows him in a Phillies' uniform from his days with the class-A Bakersfield Phillies in 1963.)

In April 1964, the Mets selected him from the Phillies in the minor-league draft, and from 1964-66, Darrell was a starting pitcher with the Mets' triple-A teams. During those same 3 seasons, he appeared in 10, 18, and 32 games for the big club, mostly as a reliever.

In 1967, Sutherland spent the entire season with double-A Williamsport, where he made 38 relief appearances and 1 start. After the season, the Indians selected him in the minor-league player draft. 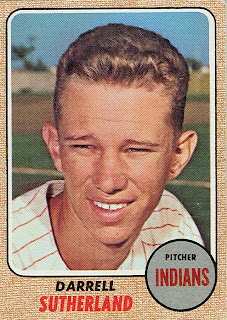 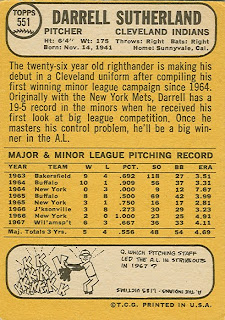 Darrell only appeared in 3 games for Cleveland in 1968, while spending the bulk of the season with the Indians' AA and AAA teams.

His final pro season was in 1969, where he appeared in 47 games (all in relief) for the Indians' triple-A Portland team.
Posted by Jim from Downingtown at 10:32 PM No comments: