Phil Niekro was signed by the Milwaukee Braves in 1958. Phil played 4 seasons in the minors (1959-62), as a reliever, then missed the 1963 season while in military service. He made the Braves’ team to begin the 1964 season, but after 10 relief appearances, he was sent down to triple-A Denver in mid-May for the remainder of the season. During that time, he became primarily a starting pitcher.

Niekro returned to the Braves for all of 1965, although he was back in the bullpen for all but 1 of his 41 games. In 1966, Phil appeared in 28 games (all in relief), but spent all of June and July in the minors. 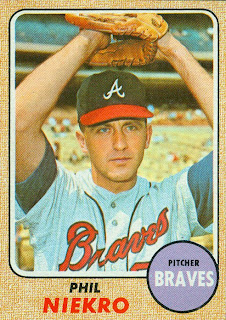 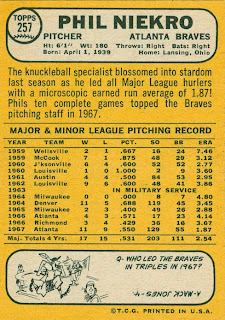 After compiling a record of 11-10 in 201 innings in 1983, the Braves released Niekro. He was quickly signed by the Yankees, winning 16 games in each of his 2 seasons with New York. Phil was released by the Yankees during spring training in 1986, but played for the Indians for the next year and a half. Niekro was traded to the Blue Jays in August 1987, then was released at month’s end. He re-signed with the Braves for the final week of the season, then retired.

Niekro was inducted to the Hall of Fame in 1997. His #35 (which he wore for his entire career) was retired by the Braves in 1984, 3 seasons before his retirement.

Among his other post-retirement activities, he coached a women’s professional baseball team.
Posted by Jim from Downingtown at 11:13 PM No comments:

Last week, I was surprised to realize that I hadn’t featured Willie McCovey on any of my blogs so far. This was corrected immediately with a post to the 1967 blog. Later, I took a mental cross-country trip (NYM-Phil-Pitt-ChiC-StL-Atl-Cinn-Hou-SF-LA) and a 2nd lap (Bos-NYY-Balt-Wash-Clev-Det-ChiW-Minn-KC/Oak-Cal) to see if I could think of any superstars that I missed on my blogs.

This exercise netted Bob Gibson, Hank Aaron, Harmon Killebrew, and Johnny Bench, and some lesser stars like Jim Hunter, Tony Oliva, Phil Niekro, Billy Williams, Norm Cash, Willie Horton, Boog Powell, Bill Mazeroski, and Willie Stargell. So, I’ve got my work cut out for me over the next few weeks…

He also compiled a 22-9 record, and won both the Cy Young and MVP awards. Gibson pitched another 3 complete games in the World Series, but unlike the previous season, he was 2-1 in those games. Bob's post-season ERA was a miniscule 1.67. Oh… he also set a record by striking out 17 Tigers in game #1. 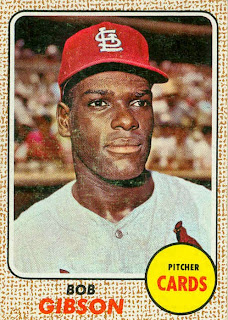 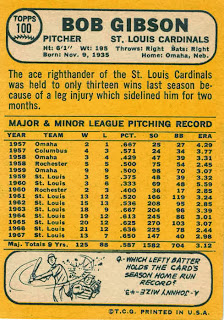 Gibson was signed by the Cardinals in 1957, and made his major-league debut in April 1959, although he spent a good deal of time in the minors during both 1959 and 1960. He also played basketball for the Harlem Globetrotters during these early years.

After his playing career, Bob was the pitching coach for the Mets and the Braves in the early 1980s, while former teammate Joe Torre managed those teams.


This is my original card from 1968, and is well-scuffed from all the "playing time" it got. This is the last of the 1968 "hero cards" that I listed in the first such post.
Posted by Jim from Downingtown at 9:18 PM 1 comment:

When I was collecting cards back in the late 1960s, I would keep them sorted by team, with each team rubber-banded and stacked in either my "NL box" or "AL box". The boxes were the actual boxes they were sold in (see photo below). The guy at the corner store where we bought our cards would let us take the box if we bought the last pack in the box.

Anyway, I probably had four or five boxes for each year. Two boxes (NL, AL) would be used to store my singles, then the rest would hold my duplicates. Since the boxes held 3 stacks of cards, the 3rd box would be for doubles (2 stacks) and triples. The 4th box would be for my 4's, 5's, and 6's, and so on.

Where am I going with this? I remember that for the 1968 set, I had more Bud Harrelson cards (8 or 9) than any other card. That 5th box was mostly for Bud. 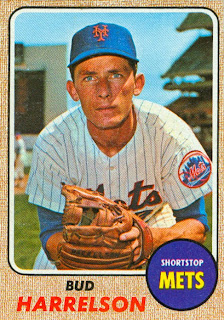 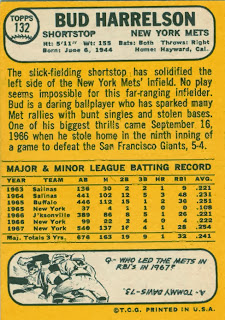 Bud Harrelson was entering his 2nd season as the Mets' regular shortstop in 1968. In another year he, along with other newcomers Tom Seaver, Jerry Koosman, Nolan Ryan, Donn Clendenon, Tommie Agee, and Ed Charles would push the team all the way to World Series victory.

The switch-hitting Harrelson was signed by the Mets in 1963, and played 4 seasons (1963-66) in the minors. He was called up in September 1965, and again in late August 1966. Bud started most of the games at shortstop during September 1966, replacing incumbent veterans Roy McMillan and Eddie Bressoud. After the season, McMillan was released and Bressoud was traded, paving the way for Harrelson to be the everyday shortstop in 1967.

In March 1978 he was traded to the Phillies, where he played two seasons as a backup middle infielder, and finished his career with the Rangers in 1980.

After his playing career, Bud managed in the Mets's farm system in '84 and '85, then managed the Mets from 1990-91. He also managed the independent Long Island Ducks in 2000. 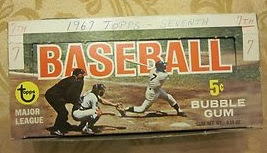 Back on Topps' Radar: Tony LaRussa

Tony LaRussa (#571) returns to a Topps set for the first time since his (full) rookie card in the 1964 set. He was a utility infielder for the Oakland Athletics in the late 1960s/early 1970s, but (obviously) had a much more successful career as a manager.

LaRussa was signed by the Kansas City Athletics in 1962, and played in their minor-league system every season from 1962 to 1971 (except for 1963, when he inexplicably spent the entire season with the big club, although only playing in 34 games, mostly as a pinch-hitter).

Tony played a few games with Oakland in 1968 and 1969, but got the most big-league playing time in 1970, when he appeared in 52 games, including 28 starts at 2nd base while filling in for Dick Green. He was up and down in 1971, then in mid-August, the A’s sold him to the Braves, where he finished out the season in the majors.

After 1971, LaRussa played only in the minors (save for 1 game with the Cubs in April 1973), as he bounced around with the Braves, Cubs, Pirates, White Sox, and Cardinals, retiring after the 1977 season. 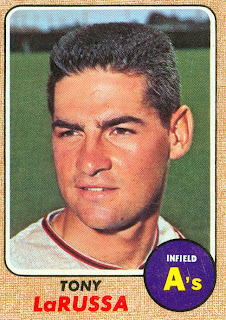 (Rumor has it that velcro was invented after the president of 3-M saw this baseball card!) 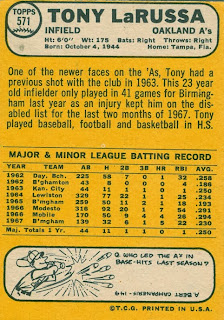 Tony earned a law degree immediately after his playing career was over, and also joined the White Sox as a minor-league manager. He assumed the Sox’ managerial position in 1979 when Don Kessinger was fired after 108 games. The White Sox won the AL West in 1983, but lost to the Orioles. LaRussa continued as manager until he was fired in mid-1986.

LaRussa finished with 2,728 wins as a manager, behind only old-timers Connie Mack and John McGraw.
Posted by Jim from Downingtown at 3:50 PM No comments: