Here is the only card showing Bob Bailey in a Dodgers' uniform. Bailey played for the Dodgers only for 1967 and 1968 (traded from the Pirates for Maury Wills). His 1967 card is a capless number showing him in a Pirates' uniform. After the 1968 season, he moved on to the expansion Montreal Expos, and his 1969 card ALSO shows him capless in a Pirates’ uni. So Dodgers' fans: this is it for Bob Bailey!

Bailey played in the Pirates' minor league system for 2 seasons (1961-62) before making his major-league debut with the Pirates in September 1962. He started 12 of the final 15 games at 3rd base, replacing the veteran Don Hoak. 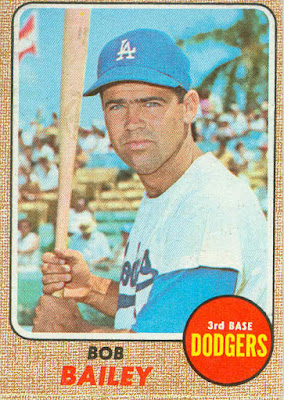 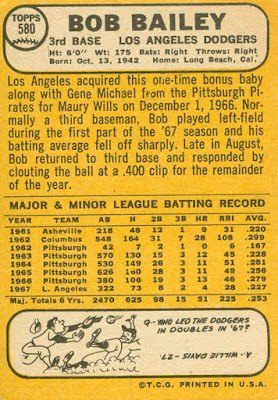 With Hoak traded to the Phillies in the off-season, Bailey became the starting 3rd baseman for the Pirates from day 1 of the 1963 season. He started 153 games at the hot corner in his rookie season.

The Pirates picked up veteran Gene Freese in 1964, and he shared the 3rd base job with Bailey that season (with Bob getting 60% of the starts at 3B, and another few dozen in left field). Bob was back to full-time status at 3rd base the following season, making 133 starts (to Freese's 17).

In Bailey's final season with the Bucs, he shared the 3rd base job with utility man Jose Pagan, with both starting about half the games. Bob also saw some playing time in left field on Willie Stargell's days off. After collecting over 500 at-bats in his first 3 seasons, Bob’s workload was reduced in 1966, only having 380 at-bats in 126 games.

After the '66 season, the Pirates sent Bailey and shortstop prospect Gene Michael to the Dodgers in return for shortstop Maury Wills. (With Gene Alley set at shortstop, Wills played 3rd base for the Pirates for the next 2 seasons. He would join Bailey in Montreal at the start of the 1969 season.)

Bob didn't have a full-time spot for his 2 seasons in LA. He had 322 at-bats in both seasons, playing less than 120 games each year. The Dodgers had also acquired 2nd baseman Ron Hunt in the same off-season, so their former ROY Jim Lefebvre moved over to 3B for many games, leaving only 65 starts there for Bailey. (He did start 23 games in left field.)

The following season Hunt was gone (freeing up 2nd base for Lefebvre), but Bob only started 88 games there, and none in the outfield.

Selected in the expansion draft, Bob was the Expos' 1st starting 1st-sacker. He started 83 games then gave way to ex-Dodger Ron Fairly in the 2nd half of the season. That was his only season with significant playing time at 1st base.

After the 1975 season he was traded to the Reds for pitcher Clay Kirby. Bob rode the bench in Cincinnati for 2 seasons, then played his final season (1978) with the Red Sox, mostly as a DH or pinch-hitter.

When his playing career was over, Bailey managed in the minor-leagues for several organizations from 1979 to 1987.
Posted by Jim from Downingtown at 3:51 PM No comments: