For some unknown reason, three of the players on the 1967 Topps all-rookie team do not have trophies on their card. I have previously posted the card for outfielder Rick Monday, leaving only pitchers Rich Nye and Dick Hughes to complete the subset.

Rich Nye was the lefthanded pitcher chosen for the 1967 Topps all-rookie team. Nye pitched from 1966-70, although his primary years were 1967-69 for the Cubs.

Rich was drafted by the Astros in 1965, but did not sign. He was signed by the Cubs in 1966, while pitching for UC Berkeley. Nye pitched for the Cubs' rookie and class-A teams that summer, then joined the big club in September. 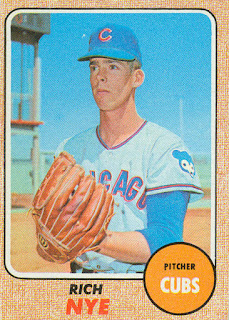 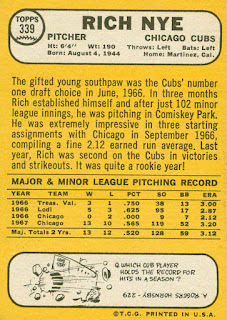 After 2 relief appearances in 1967, Nye joined the starting rotation on April 30th, after other starters went by the wayside. He finished his rookie season with 13 wins and 119 strikeouts in 205 innings. All three of those numbers placed him 2nd on the staff, behind sophomore Fergie Jenkins. Topps apparently took notice (despite the missing trophy).

Nye slipped to 7-12 in 1968, and dropped to #5 in the rotation, behind Jenkins, Bill Hands, Ken Holtzman, and Joe Niekro. 1969 was worse yet, as he was relegated to the bullpen, making only 5 starts among his 34 appearances.

After the season, he was traded to the Cardinals for outfielder Boots Day. (Philly trivia: As a Montreal Expo in 1971, Boots was the first batter in Veterans Stadium history.) After 6 relief appearances (totaling 8 innings), Rich was sold to the Expos on May 15th, where he made 6 starts and 2 relief appearances. He was also used as a pinch-runner twice, and spent time with the Expos' AAA team in Winnipeg.

He played for three AAA teams (Expos, Indians, Pirates) in 1971, before his career was ended by a torn rotator cuff.

After his playing career, Nye began working as a civil engineer, before becoming a veterinarian.

Posted by Jim from Downingtown at 9:23 PM 2 comments: 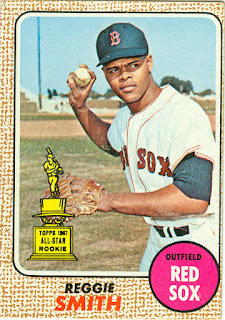 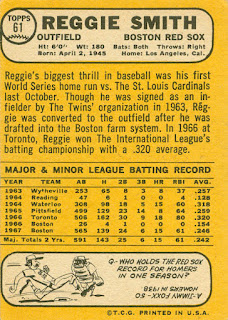 Smith played 2 more seasons in Japan before retiring.
Posted by Jim from Downingtown at 11:45 PM No comments:

Etheridge was signed by the Giants in 1964, and played in their farm system from 1964-68. He joined the Giants in mid-July 1967, and played 40 games in his rookie season, mostly in July and August. (In late August, Jim Ray Hart moved back in to 3rd base from left field, and Etheridge rarely played in September.) Somehow, Bobby got the all-rookie nod, over other rookie 3rd basemen like Aurelio Rodriguez and Sal Bando. 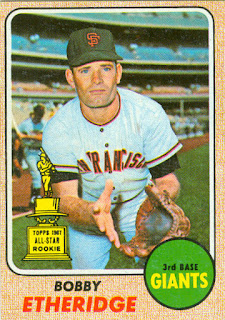 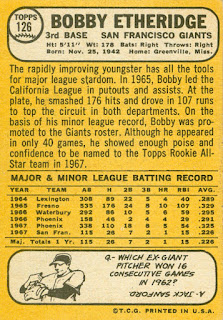 That was it for Etheridge, both as a Giant and as a major-league player. After the season, he was traded to the Padres along with pitcher Ron Herbel and catcher Bob Barton for pitcher Frank Reberger.

Bobby played in the minors though the 1973 season, with the Padres', Cardinals', and Mets' organizations.
Posted by Jim from Downingtown at 9:18 PM No comments: