Jerry Grote was the Mets' starting catcher from opening day 1966 through the end of August 1976.

Grote was signed by the Houston Colt .45s in June 1962 and was assigned to their double-A team in his hometown of San Antonio, TX. He showed good power for a rookie catcher thrown into double-A ball by hitting 14 homers in 121 games.

He played for the Colt .45s for all of the 1964 season, starting 88 games behind the dish, while sharing the spot with last year’s incumbent John Bateman, who made 72 starts.

Jerry spent all of 1965 in triple-A, probably due to his .181 batting average the year before. In mid-October he was traded to the Mets for pitcher Tom Parsons (who had just compiled a less-than-stellar 1-10 record with New York). It turned out to be a steal for the Mets! 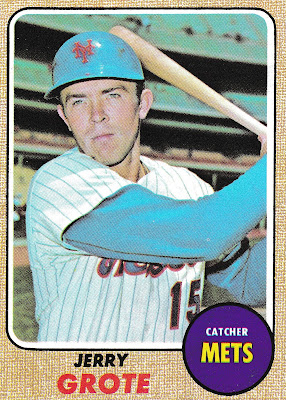 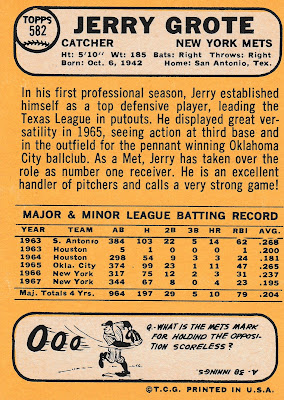 The Mets traded away 1965's starting catcher Chris Cannizzaro a week before the start of the 1966 season, opening up the starting job for Grote. (Interestingly enough, Cannizzaro would not get significant major-league playing time again until 1969, with the expansion Padres.)

Grote was the Mets' #1 catcher from the start of the 1966 season, until 9/1/76. When rosters were expanded then, rookie prospect John Stearns was called up, started most games in September, and for several years thereafter.

During Jerry's tenure with the Mets, they appeared in 2 World Series, winning in 1969. He caught every inning of both series. Grote made 2 All-Star teams ('68, '74), but never showed the power from his rookie season in the minors, topping out with only 6 home runs in 1969.

With Stearns taking over the catching as of September 1976, Grote was traded to the Dodgers in August 1977. He appeared in 2 post-seasons with LA ('77, '78) while serving as Steve Yeager’s backup.

Grote was granted free agency after the 1978 season, and was out of baseball for 2 years until the Royals picked him up in April 1981. He made 20 starts in that strike-shortened season as John Wathan's backup, but was released on September 1st.

The Dodgers signed him for the remainder of the season, but he only made 2 pinch-hitting appearances, both in October. Grote was released after the season, ending his 16-year career.

He was inducted into the Mets Hall of Fame in 1992.
Posted by Jim from Downingtown at 12:06 PM No comments:

Hands began his career in the Giants’ organization in 1959. He pitched in their farm system for SEVEN seasons, and made his major-league debut with 4 games in 1965 (3 in early June, 1 in October).

After the ’65 season, he and catching prospect Randy Hundley were traded to the Cubs for veteran reliever Lindy McDaniel and fading outfielder Don Landrum, in what many Giants' fans consider to be another in a string of bad trades by Giants' management in that era. 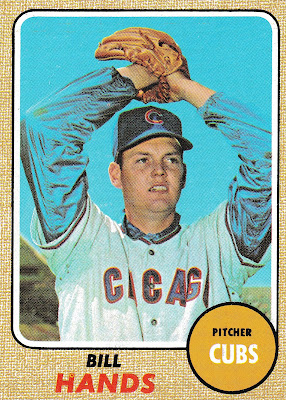 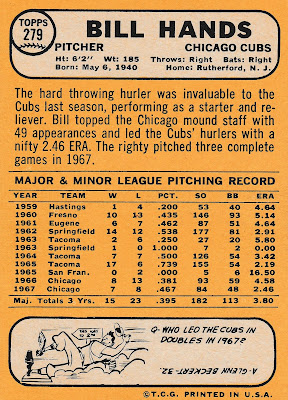 After the 1972 season he was traded to the Twins for reliever Dave LaRoche. Hands was primarily a reliever during his 2-year hitch with the Twins, but did not enjoy the same success that he had during his stay with the Cubs.

In September 1974 he was claimed off waivers by the Rangers. He appeared in 2 games for Texas that month and 18 in 1975. Although traded to the Mets in February 1976 for pitcher George Stone, Hands retired before the ’76 season.