On the back of his card, we see a 4-year gap in major-league service between 1955 and 1960. As Topps often does with long-time vets, his minor league stats are omitted from the back of the card.

Bob began playing pro baseball in 1948 in the Cardinals' system. Tiefenauer had a 6-game cup of coffee (8 innings, all in relief) with the Cardinals in 1952, followed by 2 more seasons back in the minors. In 1955, he resurfaced with the St. Louis, this time for 18 relief appearances (32 innings). 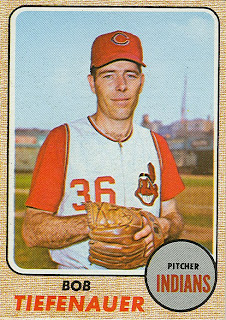 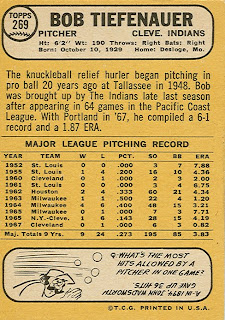 In September 1955, Bob began a 5-year odyssey through oblivion that started with his trade to the Detroit Tigers. The Tigers assigned him to the minor leagues, where he remained for the entire 1956 season. After the season, he was traded to Toronto, an unaffiliated AAA team in the International League. He made over 60 appearances per season (all in relief) for Toronto in 1957 and 1958. Following the 1958 season, Toronto traded him to the Indians, but he retired, rather than play in 1959.

In 1960 he spent some time with the Cleveland Indians until his early June acquisition by the Cardinals. St Louis kept him in the minors for the rest of 1960 and most of 1961, although he appeared in 3 games for the Cardinals.

After the 1961 season, he was purchased by the expansion Houston Colt .45s, and spent the 1962 season with Houston, before being traded BACK to the Cardinals (again) just before the 1963 season.

It almost seems that the Cardinals liked to mess with him, because in mid-June of the same year, he was traded again, this time to the Milwaukee Braves. After playing for the Braves for 2 seasons, he was traded to the Yankees in June 1965. His time in New York was short, because 2 months later he found himself back with the Indians!

This year (1968) he didn't even play for the Indians, as he was traded to the Cubs at the end of March for pitcher Rob Gardner. Bob appeared in only 9 games for the Cubs in 1968, his last on September 21st.

He played for Chicago's triple-A team in Tacoma, WA for most of 1968 and all of 1969 before retiring.
Tiefenauer played 19 seasons in the minor leagues!
.
Posted by Jim from Downingtown at 4:18 PM