First, let me point out that the late-1960s cards of Don Lock are the most complete example of Topps' photographical laziness that I have found. Lock was traded to the Phillies in November 1966. His 1967 card shows him in a hatless photo. Fine, no problem there, because he was just traded. But, here it is ONE YEAR LATER, and Topps puts out another hatless card of Lock (with a different photo than 1967). To top it all off, Don's 1969 card (still with the Phillies, mind you) has ANOTHER hatless photo! More than 2 seasons after his trade from the Senators, and while on the Phillies roster for all that time, Topps couldn't squeeze out a new photo of Don Lock.


Don Lock was signed by the Yankees (I didn't know that until today) in 1958, and spent over 4 seasons on the Yankees' farm, until he was traded to the Senators on July 11, 1962 for 1st baseman Dale Long. Six days later, he made his major-league debut with the Senators. He started 63 of the final 76 games that season, all but one in left field. 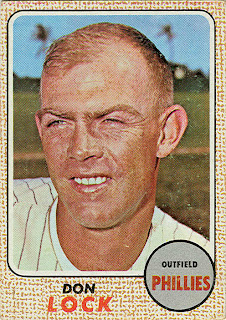 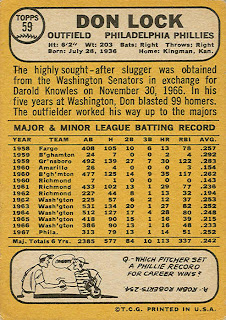 In 1963, Don began the season as the center fielder, and except for a stretch of 19 consecutive games in late April and early May, he was the undisputed #1 in center, with 129 starts there. He also started 9 games in right field. Lock bashed 27 homers in his first full season.

1965? The center field scoreboard says Don Lock 116 games, Woodie Held 34 games. Replaced by Woodie Held? That's what happens when your average drops to .215 and you only hit 16 home runs.

Lock seems to be slipping in his last 2 seasons with the Senators. This affirms what I have often thought was a bad trade made by the Phillies in the mid-1960s (and always overlooked, in the shadow of the Fergie Jenkins trade). The Phillies traded pitcher Darold Knowles, who led the team in saves during his rookie season in 1966, for a starting outfielder who, under closer examination, was already on the decline. I can remember back in the 1960s, one of the "great reasons" to get Lock was that he "hit 99 home runs with the Senators" (something that is repeated on the back of this card).

Knowles went on to accumulate 143 saves in a 16-year career, which ended in 1980. Lock was heavily platooned during his 2 full seasons with the Phillies, and was sent packing to the Red Sox in early May 1969, for a guy whose entire major-league career consisted of one at-bat in 1965. Lock remained with the Red Sox through the end of the 1969 season, before retiring.