Dick Dietz was the catcher on the 1967 Topps All-Rookie team, one of 2 Giants to be selected to the squad. Dick's rookie card appeared in the 1967 set, where he was listed as an outfielder.

Dick made his major-league debut in mid-June 1966, and played 13 games over the 2nd half of the season. 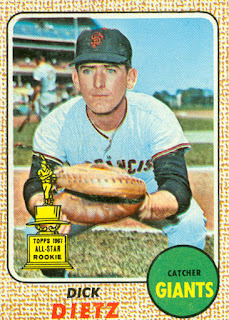 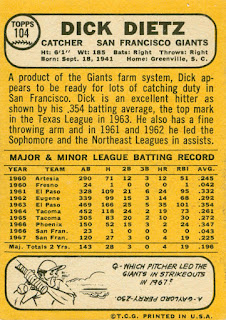 Dick started 34 games in 1967 (behind veteran Tom Haller's 120 starts), then became the Giants' primary catcher beginning in 1968, after Haller's trade to the Dodgers. Hmm... until now, I always thought Dietz was the full-time catcher starting in 1968, but he caught about half the games during the '68 and '69 seasons, with Jack Hiatt and Bob Barton splitting the remaining games.

In 1971 he hit 19 home runs, while starting 127 games behind the plate. Dietz finished out the season with the Giants, but after the player strike in Spring 1972, Dietz (who was the team's player representative) was put on waivers in April.

He was claimed by the Dodgers, and played 27 games as LA's 3rd-string catcher behind Chris Cannizzaro and Duke Sims. After Dick broke his wrist on July 30th, and was lost for the season, rookie Steve Yeager was called up to fill the 2nd-string role, while Sims was traded away.

1973 was Dietz' final season, and he found himself in Atlanta as the Braves' backup catcher/1st baseman.