I'd better get this posted, before the World Series ends.....


The 1967 Fall Classic featured the Cardinals and the Red Sox. The Cards were making their 2nd trip there in 4 years, while the Red Sox hadn't seen post-season action since 1946 (when coincidentally, their opponent was the Cardinals).

In 1967, Boston had just come off two 9th-place finishes, and entered the season not only with a new manager (Dick Williams), but it was Williams' 1st big-league managing assignment. 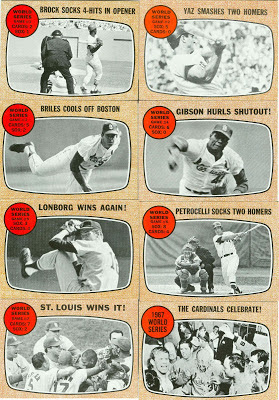 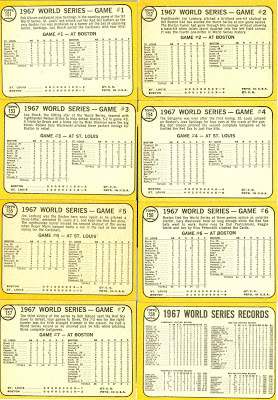 The Cardinals were too much for the upstart Sox. This was a veteran club that had just won the Series in 1964, and had an all-star caliber player at just about every position.

In short...Gibson would just not lose. All St. Louis had to do was find one more win from among the rest of their rotation, which they did in game #3.
Posted by Jim from Downingtown at 8:55 PM No comments:

Each of these players had a major-league career lasting exactly one game. (Larry Colton pitched 2 innings on 5/6/1968, while Dick Thoenen pitched 1 inning on 9/16/1967.) This is the rookie card for both players, and the only card for Thoenen. Surprisingly, Colton re-appears on a 1969 Phillies Rookies card.


Larry Colton was signed by the Phillies in 1964, and was a starting pitcher in their farm system for 5 seasons (1965-69), starting at least 25 games each season except for 1968. That season, he spent part of the time riding the bench in Philadelphia, along with some time on the DL.

At the time, it was reported that he "hurt his shoulder reaching for the telephone on his bedside table". Years later, it was revealed that he was injured in a bar fight, and it cost him his shot in the majors.

After the '69 season, he was sent to the Cubs to complete the Johnny Callison for Dick Selma and Oscar Gamble trade. Colton pitched the 1970 season for the Cubs AAA team, then was out of baseball until pitching the 1975 season for an unaffiliated class A team.

At one time, Colton was married to the daughter of movie star Hedley Hedy Lamarr. 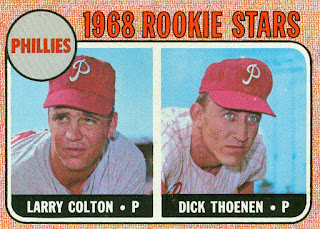 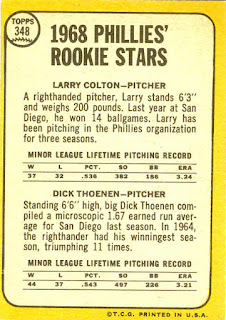 Dick Thoenen was signed by the Phillies in 1963, and pitched for 7 seasons in their farm system. Although a starting pitcher for his first 3 seasons, he was converted to a reliever at the start of the 1966 season and worked out of the bullpen in double-A (1966), and triple-A (1966-69).

His cup of coffee was pitching the 4th inning in relief of starter Rick Wise. After giving up hits to the Dodgers' Bob Bailey and Luis Alcaraz, he retired Don Sutton, Nate Oliver, and Wes Parker in order.

I found this write-up about Dick Thoenen recently at the NJ Baseball blog. At the end of the blog post, there's a newspaper clipping listing the Phillies' September 1967 call-ups. Larry Bowa was among them, although he wouldn't get into a major-league game until April 1970.
Posted by Jim from Downingtown at 8:45 PM 5 comments:

For the past few years, one of the recurring series on this blog has been a player's final card. The 1968 set includes the final card for 48 49 players and 2 managers, pictured below in order of years of service, from Eddie Mathews (17 years, and the only player to play for the Boston, Milwaukee, AND Atlanta Braves) to several players with 2-year careers (no 1-year wonders this time).

Some played several more seasons after their final card was issued (Pete Mikkelsen to 1972, Jim Bouton to 1970, plus a cameo in 1978), others went out on top (Mathews and Roger Maris played in the '68 World Series), or went out near the top (Elston Howard and Norm Siebern played in the '67 Series), while the vast majority just went. 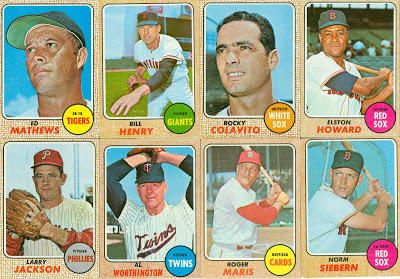 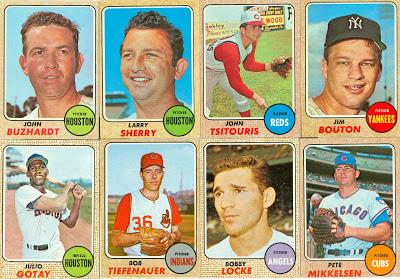 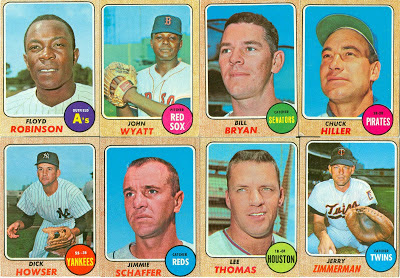 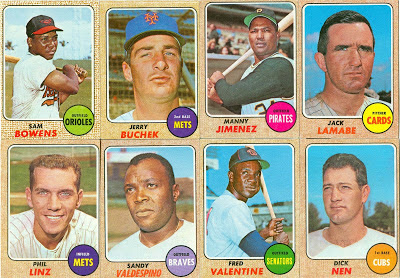 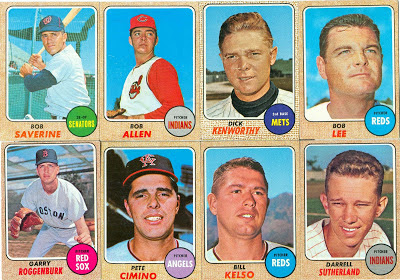 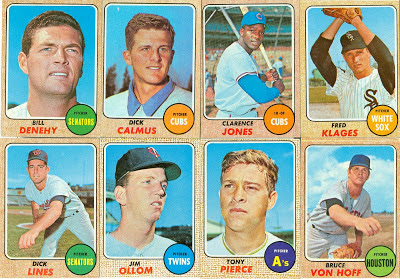 Posted by Jim from Downingtown at 8:15 PM No comments:

This is the only solo card for pitcher Bill Denehy (#526). He also appeared on a Mets Rookies card in 1967 - a very pricey card, due to his cardmate Tom Seaver.

Denehy was signed by the Mets in 1965, and was a starting pitcher in their system for 2 seasons. 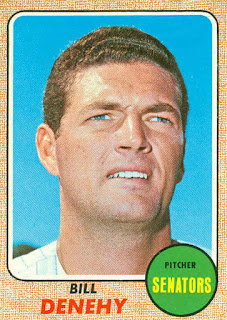 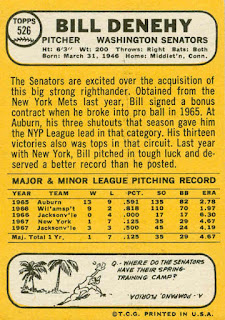 In 1971, Bill spent all but the month of April pitching for the Tigers, appearing in 31 games (1 start).
Posted by Jim from Downingtown at 11:43 AM No comments:

Here is the final card for White Sox' pitcher Fred Klages (#229). He also appeared on a White Sox Rookie Stars card in the 1967 set.

Klages is from the sports hotbed of southwestern Pennsylvania, specifically Ambridge in Beaver County*, which is also the hometown of 1960s Detroit Lions middle linebacker Mike Lucci. 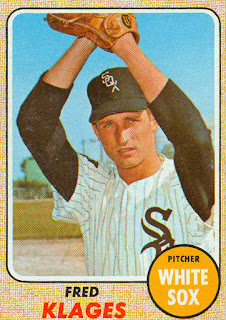 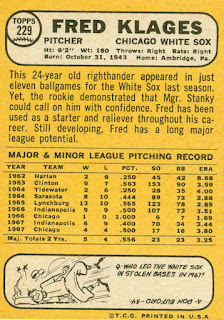 His brief major-league career started in September 1966, when he made 3 starts. In 1967, he made one start on June 14th, then another 10 appearances (mostly starts) from July 31st to the end of the season. His last major-league game came on September 11th - the one-year anniversary of his debut.

After 2 more seasons with the Sox' triple-A team, he played part of the 1969 season in the Mexican League.

Here is the only solo card for Athletics' pitcher Tony Pierce (#38). He also appeared in a late-series Athletics Rookie Stars card in the 1967 set.

Pierce was signed by the Kansas City Athletics in 1964, and was a starting pitcher in their minor-league system for 3 seasons. Tony advanced slowly, pitching in Rookie and A ball in '64, repeating A ball in '65, and moving up to AA in '66. 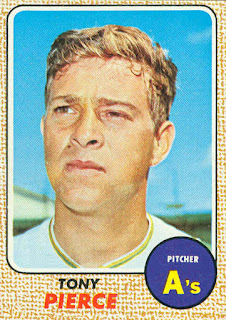 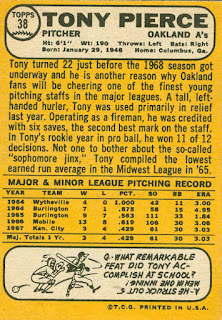 After compiling a 13-8 record with AA Mobile in 1966, Pierce skipped over triple-A, jumping up to Kansas City to start the 1967 season. Tony worked out of the bullpen, where he and Paul Lindblad were the only lefties on the entire staff. Besides his 43 relief appearances, he also started 6 games (including all 5 of his games in September).

When the Athletics moved to Oakland in 1968, Pierce returned to the bullpen. He only pitched in 17 games that season, the last on June 21st. I suspect he came down with arm problems, since he never played in the majors or minors again.
Posted by Jim from Downingtown at 9:32 PM 3 comments: