With Koufax’ retirement after 1966, everyone moved up a notch in the starting rotation. Don posted 2 consecutive 11-15 seasons, then bounced back in 1969 with 17 wins and 217 strikeouts. 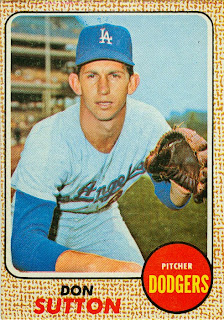 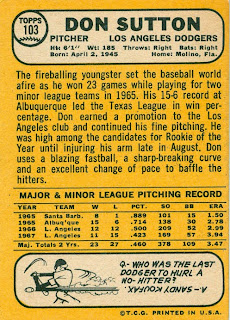 Don became a free agent after the 1980 season, and signed with the Astros. After 1 ½ seasons in Houston he was traded to Milwaukee in August ’82 for outfielder Kevin Bass and two others, as the Brewers geared-up for their first post-season.

Sutton went 4-1 in 7 starts for the rest of the season, and was 1-1 in 3 post-season games. He pitched for 2 more seasons in Milwaukee, then was traded to the Athletics after the 1984 season.

Don bounced around for the next 3 seasons from the Athletics to the Angels, before finishing his career in 1988 with the Dodgers. He was a starting pitcher right up to the end, finally getting his release on August 10, 1988. Sutton pitched for 23 seasons, amassing 324 wins and 3574 strikeouts.

In 1998, Sutton was inducted into the Hall of Fame, and also had his #20 retired by the Dodgers.

Sutton has been broadcasting baseball games since 1989, mostly for the Braves.
Posted by Jim from Downingtown at 10:41 PM

Wow. He Pitched a long time