Paul Blair was the speedy center fielder for the Orioles during their mid-1960s to mid-1970s golden days.

Blair was signed by the METS (who had yet to field a team) in July 1961. The Orioles claimed him after the 1962 season in the minor-league draft of first-year players. (I learned something new today!)

Paul played in the Orioles’ system for the ’63 and ’64 seasons, and made his major-league debut in September 1964, playing in 8 games as a pinch-runner or defensive replacement in center field (with only 1 at-bat). 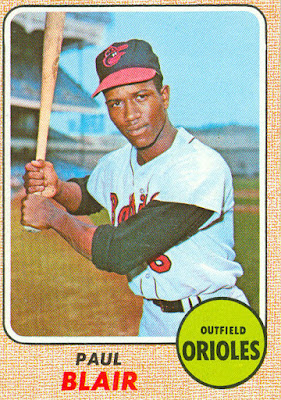 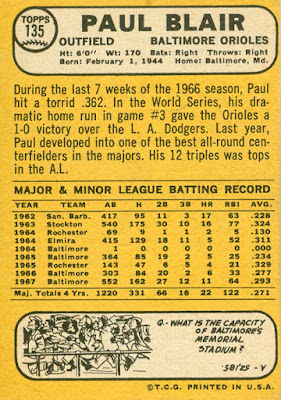 Blair was the Orioles’ starting center fielder for the first 2 months of the 1965 season, then was in and out of the lineup during June, before missing the entire month of July. He returned to the starting lineup on August 6th, and started all the remaining games in center field. 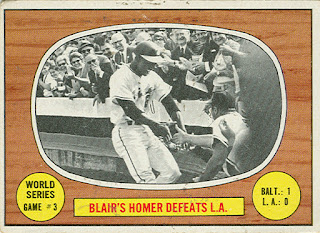 After 1976, he was traded to the Yankees for outfielder Eliot Maddox. After 2 seasons as a part-time player for the outfielder-heavy Yankees, he was released in April 1979.

Blair was signed by the Reds a month later, and was a bench player for the remainder of the season, although he also made 37 starts in center field (but none after early-August).

Granted free agency after the 1979 season, Paul did not find work until the end of May 1980 when the Yankees re-signed him. After appearing in 12 games over the next month, he was released on July 1st, ending his 17-year career.

Stange was signed by the (old) Washington Senators in 1957, and made his major-league debut with the relocated Minnesota Twins in April 1961. He pitched 2 games in April and another 5 in September, all in relief.

Lee returned to the Twins for a full season in 1962, and was used almost exclusively in relief. After the month of April 1963, he was mostly used as a starting pitcher, and finished with a 12-5 record, his only season with double-digit wins. 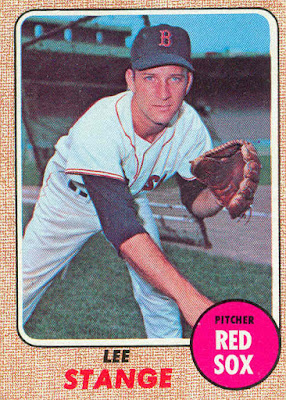 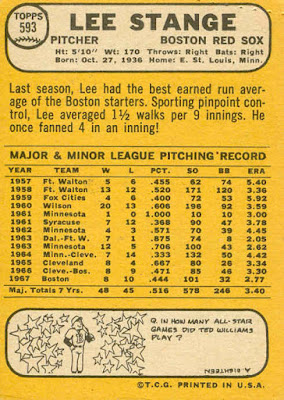 After 14 appearances, in mid-June 1964 Stange was traded (along with George Banks) to the Indians for pitcher Jim “Mudcat” Grant. In his first 1 ½ seasons with Cleveland, Lee was used as a reliever in about 2/3 of his games.

In mid-June 1966, Lee was traded to the Red Sox with veteran fireman Don McMahon for reliever Dick Radatz. Lee made 19 starts that season, and although he began the 1967 season in the bullpen, by early June the Sox made him a starter. He started 24 games the rest of the way as Boston made their way to the World Series. Stange pitched in one game in the Series.

After 1967, it was back to the bullpen for the rest of his career. He played 2 ½ more seasons with Boston, then was sold to the White Sox in June 1970. He was released after that season.

After his playing career, Stange was the pitching coach for the Red Sox, Twins, and Athletics in the 1970s and 1980s.
Posted by Jim from Downingtown at 12:46 PM No comments: 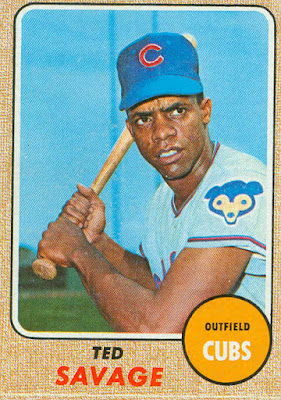 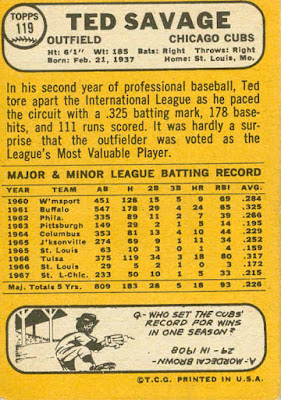 Here’s relief pitcher Phil Regan, on his last card as an LA Dodger, a first-series card with wide-grain burlap borders.

Phil was signed by the Tigers in 1956, and pitched in their farm system for 4 ½ seasons until making his major-league debut in July 1960. Phil was a starter for the Tigers from that time on through the 1964 season, reaching a high water mark of 15 wins in 1963.

After being limited to only 16 games in 1965 (and spending some time in the minors), Regan was traded to the Dodgers after the season for utility infielder Dick Tracewski. Phil joined the Dodgers for the 1966 season, their last hurrah in the Sandy Koufax era. With the team having a starting rotation of Koufax, Don Drysdale, Claude Osteen, and Don Sutton, Regan became a full-time reliever that year, leading the NL with 21 saves. "The Vulture" also made his lone all-star team that season. 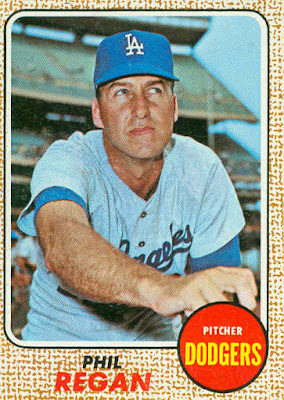 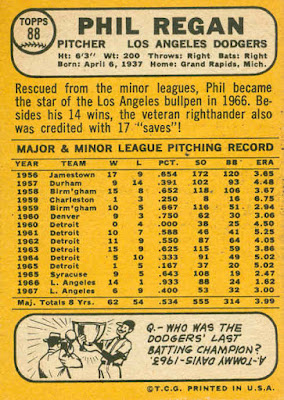 The 1967 season was not kind to the Dodgers or their fans. Koufax had just retired, Tommy Davis and Maury Wills were traded away, and the team began their only 3-season string of 2nd division finishes under manager Walter Alston.

After the 1967 season, the Dodgers began dismantling their veteran bullpen, sending Ron Perranoski and Bob Miller (along with starting catcher John Roseboro) to the Twins for pitcher Jim Grant and shortstop Zoilo Versalles. (Versalles was such a non-factor in his one season in LA that he was left unprotected in the expansion draft and was scooped up by the Padres.)

In late April ’68, Regan was sent packing to the Cubs (along with spare outfielder Jim Hickman) for outfielder Ted Savage. [ What was going on here? In ’65 Regan was traded straight-up for a utility infielder, and proceeded to lead the league in saves. Two seasons later he is traded (WITH another player) for the likes of Ted Savage? Regan then went on to lead the NL again with 25 saves! Couldn’t ANYONE evaluate talent?]

Regan was sold to the cross-town White Sox in early-June 1972, and pitched in 10 games (13 innings) until getting his release 6 weeks later, ending his 13-year career. In 371 National League games, he made just 4 starts. He started 101 of his 180 AL games, all with the Tigers.

Regan later coached and/or scouted for the Mariners, Dodgers, Cubs, and Indians, and managed the Orioles for the 1995 season.
Posted by Jim from Downingtown at 10:01 PM No comments:

Here is Jim Northrup, embarking on a banner year in 1968 which would lead to the World Series championship for the Tigers. Jim reached career highs in games, at-bats, and RBI in ’68. He also clubbed 2 homers and collected 8 RBI in the Fall Classic.

Northrup played 4 years (1961-64) in the Tigers’ farm system and made his big-league debut in September 1964. In '65 he was with Detroit for the entire season as the team’s 4th outfielder, primarily playing right field when Al Kaline moved over to center field. 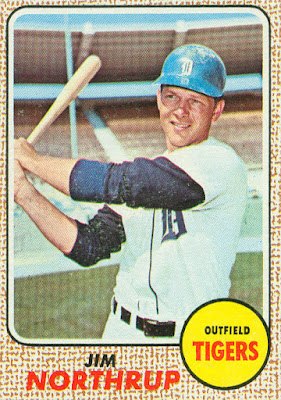 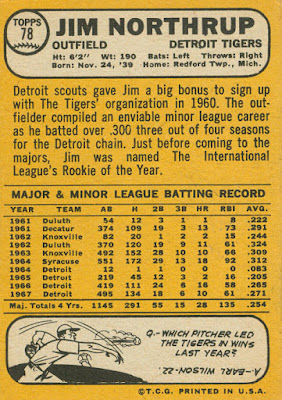 In 1966 Jim’s starts in right field increased to 97 games as he moved up to the #3 spot (behind Kaline and Willie Horton) in the outfield. With Don Demeter shipped out to the Red Sox in mid-June, Kaline spent much more time over in center field than he had in 1965.

The Tigers’ used a 4-man outfield in the late-1960s. With defensively-challenged slugger Willie Horton holding down left field, the other 2 spots were a rotation of Kaline, Northrup, and Mickey Stanley, with the fleet Stanley usually only playing center field.

In August 1974 he was traded to the Expos, who flipped him to the Orioles a month later. Northrup finished his career as a part-time center fielder for the Orioles in 1975.

Jarvis was signed by the Cubs (I did not know that) in 1960 and after one season on their farm he moved on to the Tigers’ organization. After the 1963 season, he went to the Braves in a minor-league deal for pitcher Bruce Brubaker. 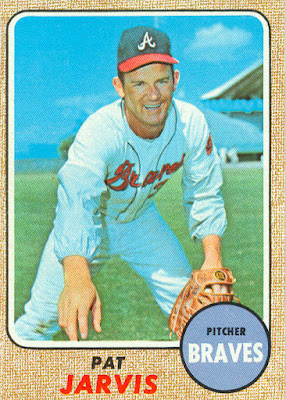 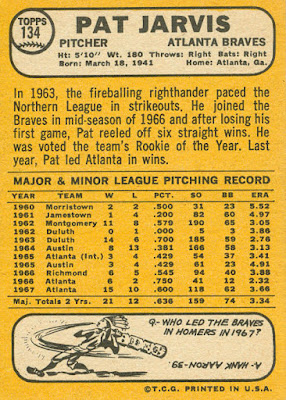 Before the ‘73 season, Jarvis was traded to the Expos for pitcher Carl Morton. This was to be his final major-league season, pitching only 39 innings (all in relief) while compiling a 2-1 record. His final game was on September 23rd.

Pat was dealt to the Rangers in December, but was released in March 1974, ending his 8-year career.
Posted by Jim from Downingtown at 7:41 PM No comments:

Topps' custom for Rookie Stars cards from 1964 to 1972 was that by the time they got to the 7th series, if there weren't at least 2 remaining rookies for the same team, they would group them on "NL Rookies", "AL Rookies", or "ML Rookies" cards.  (I'm not sure why they just didn't put Ivan Murrell and Jim Ray on a "Houston Rookies" card.)


Larry Hisle was handed the Phillies' starting center field job to begin the 1968 season, but flopped miserably, and after only 7 games was sent down to AAA for much-needed seasoning. He returned the following spring as the #1 center fielder, and after a great rookie season, slumped in 1970 and split 1971 between the Phillies and the minors. He later played 5 years with the Twins (including a career year in 1977) and 5 years with the Brewers. 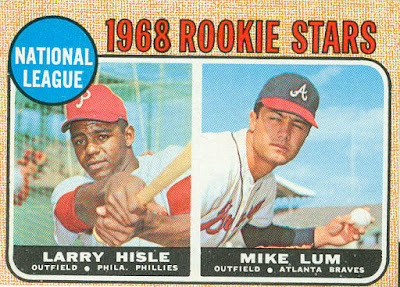 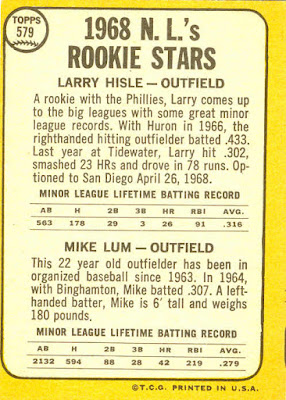 After cups of coffee with the Astros from 1963-68, Ivan Murrell was drafted by the expansion Padres in 1969 and played 3 full seasons in San Diego as a part-time outfielder. Murrell bounced up and down between the Padres, Braves, and their minor-league teams from 1972-75, then played in Mexico from 1976-83. 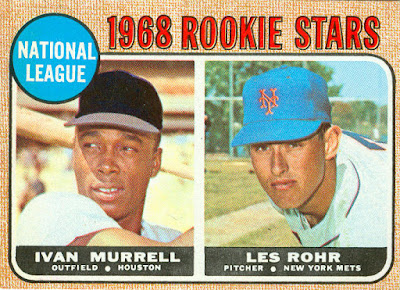 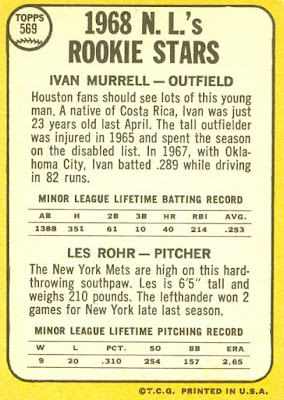 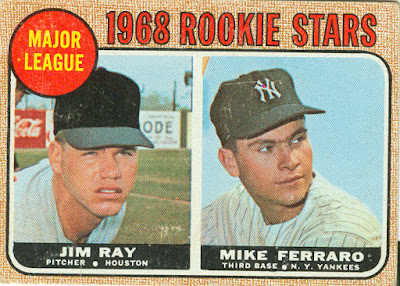 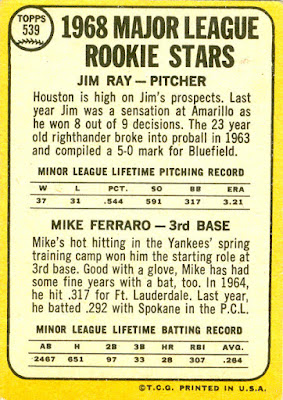