Wayne Causey was signed by the Baltimore Orioles as a bonus baby in June 1955. As such, he would remain on the Orioles roster for 2 years before spending any time in the minor leagues.

He started 56 games at third base for the Orioles, more than any of the other 5 players the Orioles used there. In 1956, he lost the starting 3B job to George Kell, who was acquired from Detroit during the season. (Kell would be replaced in 1958 by Brooks Robinson.)

After spending most of 1957 and all of 1958-60 in the minors, Causey was traded to the Athletics prior to the 1961 season, along with 4 other players for outfielders Whitey Herzog and Russ Snyder. 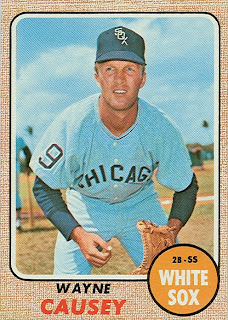 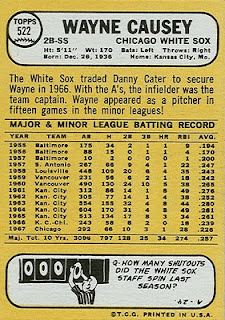 I wonder if this versatility was his ticket out of Kansas City, because in May 1966, he was traded to the White Sox for Danny Cater, who had been Chicago's regular left fielder for the previous season.

With the White Sox, Causey's playing time was diminished since Chicago's roster was already filled with non-first-base infielders (Al Weis, Don Buford, Jerry Adair, Pete Ward, Ron Hansen, Lee Elia, Gene Freese) all looking for (and getting) playing time. Wayne managed to start 40 games at 2B in 1966, and 75 games at 2B in 1967.

In mid-July 1968, Causey was traded to the Angels for infielder-outfielder Woodie Held, and 1 week later was sold to the Atlanta Braves. For all 3 teams in 1968, he was used primarily as a pinch-hitter.