1968 was the second year I collected baseball cards.

It seemed like the first series had a lot of players who were in the not-to-be-found 1967 high-numbered series. (Tom Seaver, Rod Carew, Brooks Robinson, Vada Pinson, Rocky Colavito, Al Ferrara, Cookie Rojas, and Juan Pizarro to name a few.) So I quickly had cards for those missing players.

These were my favorite cards from that set. 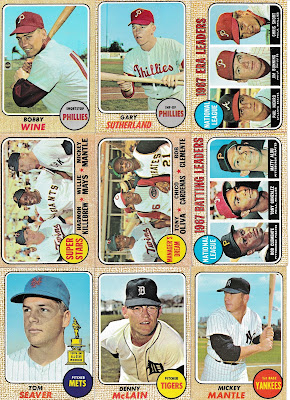 Bobby Wine - I always liked this photo, but I'm not sure why.  Although I was a Phillies fan, I was not particularly a Bobby Wine fan, nor was he one of the team's top dozen or so players.

Gary Sutherland - I do know why I liked this card.  His rookie card in 1967 was in the high-numbered series, so I didn't get that until years later.  Plus, here's a kid only a few years older than my pre-teen self at the time, and he was IN THE MAJOR LEAGUES! Surely he would be the Phillies' "shortstop of the future", with only the aging Dick Groat and weak-hitting Bobby Wine to contend with.

Super Stars / Manager's Dream - These 2 cards were in the 6th or 7th series, and were 2 of the 3 multi-player cards in the 1968 set.  The players were from a mix of teams, which was a departure from Topps' usual multi-player cards.

NL Batting Leaders - In 1967, Tony Gonzalez had worked his way up from platoon left-fielder to every-day center-fielder, and finished with a .339 batting average. (In the late-60s, Phillies' fans had to find positives anywhere we could!)

Tom Seaver - I still don't have Tom Seaver's 1967 rookie card, so this was my first Seaver card. ROY, shiny trophy, what's not to like?

Denny McLain - I admit, I jumped on the Tigers' bandwagon sometime during the 1968 season, and followed McLain's trek to 30 wins and the World Championship.

Posted by Jim from Downingtown at 3:26 PM No comments: