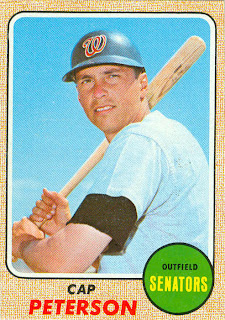 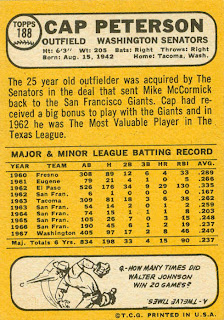 Peterson played in triple-A for 3 more seasons before retiring. He passed away on May 16, 1980 from kidney disease at age 37.
Posted by Jim from Downingtown at 2:55 PM No comments:

I can still remember getting this card in 1968, and how I really liked it. Why? I wasn't really a Bobby Wine fan. I think maybe it was the fact that the photo was so crisp, and because there were many hatless Phillies' cards in the 1968 set, this one just stood out as a nice card.

This was Bobby's last card as a Phillie. After the season, the Montreal Expos selected pitcher Larry Jackson in the expansion draft. When he chose to retire, the Phillies sent Wine to the Expos as compensation. It wasn't a great loss for the Phillies. Wine had missed all but 27 games of the 1968 season with a back injury, and the Phils had rookie Don Money waiting in the wings to take over in 1969.

This photo is from 1965, as that is the only season that Wine didn't wear his familiar #7 uniform. He had switched to #13 for that season in deference to veteran Dick Stuart. 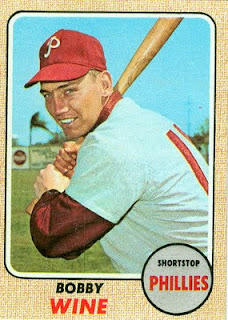 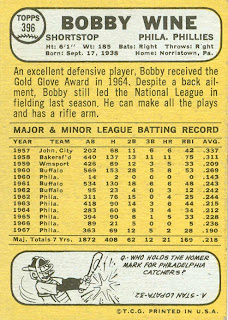 The Phillies signed Bobby in 1957, and after 5 seasons in the minors, Wine made the team in 1962. He shared the shortstop job with Ruben Amaro Sr that first season, but was the clear #1 shortstop from 1963-65, although Amaro continued to start many games at short.

After losing his starting job to veteran Dick Groat in 1966, Wine regained the position for the 1967 season. It was to be his last signifcant time with the Phillies. The 1968 season began with rookie Don Money being handed the SS job. When he faltered in early April, Wine took over for a few weeks until being sidelined for the season with his ailing back.

Moving to Montreal in 1969, Wine was the Expos' starting shortstop for their first 3 seasons. His playing time began to diminish in the final weeks of the 1971 season, and for 1972 he had lost the starting job to Tim Foli. After only 18 at-bats over 34 games, Wine was released on July 10th.

He went on to a long coaching career with the Phillies and Braves, and also scouted for the Braves.
Posted by Jim from Downingtown at 12:16 AM No comments:

This post was going to be about 8-year veteran Dick Radatz (who retired in 1969). When I went to my 1968 binder (which is arranged by teams) to retrieve his card, I couldn't find it. Indians? No. Red Sox? No. What the? After consulting my Book of All Topps Knowledge I learned that the veteran Radatz did not have a card in 1968. He was released by the Cubs during spring training in 1968, and spent the entire season with the Tigers' triple-A team, before returning to the majors for one more season in 1969.

I will have to update my list of players without a 1968 card. Meanwhile, on to fellow 8-year-veteran-retiring-in-1969 Dick Tracewski. 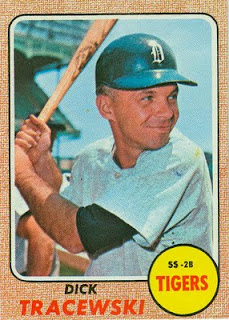 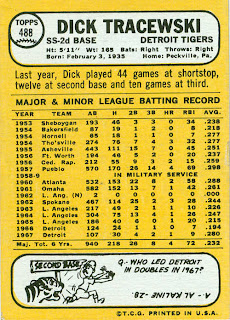 Tracewski had significant playing time during his first 2 seasons with the Dodgers, backing up Maury Wills at SS in 1963, and sharing 2B with Nate Oliver in 1964. In 1965 he received less playing time than before, primarily as Junior Gilliam's backup at 3rd base. Dick saw action in the 1963 and 1965 World Series with the Dodgers.

After the 1965 season, Dick was traded to the Tigers for relief pitcher Phil Regan. With the Tigers, Tracewski was relegated to 3rd-string middle infielder, especially after the arrival of rookie Tom Matchick in 1968. Still, Tracewski played briefly in his 3rd World Series in 1968. He retired after the 1969 season.
Posted by Jim from Downingtown at 9:50 PM No comments: