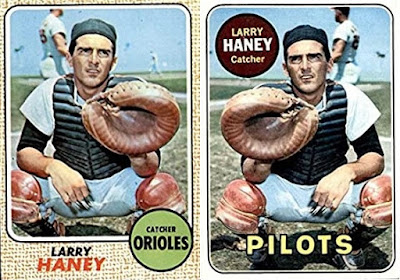 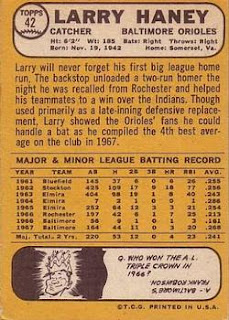 Larry Haney was signed by the Orioles in 1961, and after 5 ½ seasons in the minors was promoted to Baltimore in late-July 1966. He played 20 games that season.

Over the first 100 games, The Orioles started Andy Etchebarren 86 times, Vic Roznovsky 12 times, and Camilo Carreon 2 times. (Charlie Lau was also on the roster, but by then he was only pinch-hitting.)

Haney was called up in time for game #101, and over the next 2 weeks he started 8 games, giving Etch some much-needed rest. Larry started 15 times over the final 60 games (with Roznovsky making 13 starts). Etchebarren started 32 games, including a 19-game stretch that included both ends of two doubleheaders. (What was the manager thinking?)

Haney missed the first half of 1968, with only 3 of his games coming before June 28th. He wasn't in the minors, so was either injured or nailed to the bench. Elrod Hendricks joined the team at the start of 1968, and with "Clank" Blefary also catching 38 games, Haney was relegated to 4th-string catcher.

After the season, Larry was selected by the Seattle Pilots in the expansion draft. He started 15 of the first 50 games for the Pilots, but by mid-June was traded to the Athletics for 2nd baseman John Donaldson. He finished out the 1969 season with Oakland, but spent much of 1970-73 in the minors, mostly in the A's organization but also on the Padres' farm in 1972.

Haney returned to the majors with the Athletics from 1974-76. In '74, he shared the catching load with Ray Fosse and Gene Tenace. After playing sparsely in 1975, he and Tenace split the catching assignments evenly in 1976 (with Haney catching whenever Tenace played 1st base).

After the 1976 season, Haney was acquired by the Brewers. He started a third of the games in 1977 (backing up Charlie Moore), He was the team’s bullpen coach in 1978 but was activated for the final 2 weeks of the season.