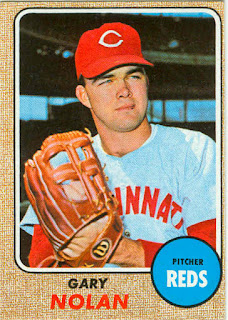 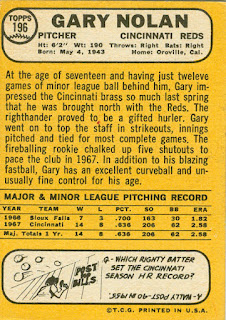 California released him in January 1978, and the next month he was picked up by the Brewers, who also released him a month later, ending his 10 year career.
Posted by Jim from Downingtown at 10:15 PM No comments:

1967 was the season of the Yaz. Like Frank Robinson one year earlier, Yastrzemski won the triple crown and led his team to the World Series. Unlike Robby, Yaz' team didn't win, nor did he finish ahead of all others in home runs. Lost in the hype is the fact that Harmon Killebrew was tied for the lead in homers.


Four AL players finished with a .300 or better average.  That doesn't sound like a lot, but the following season, only Yastrzemski would accomplish that, with a .301 average.   Following that, the mound was lowered, 40 minor-league pitchers were given major-league jobs (expansion), and Bob Gibson was asked to go easy on the batters. 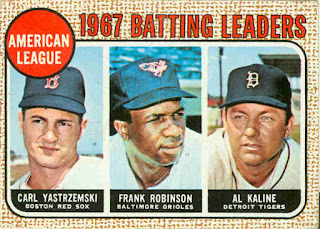 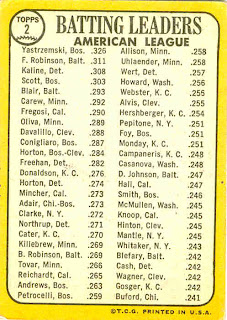 As usual, the same 5 or 6 players seem to fill the 9 spots on these leader cards. 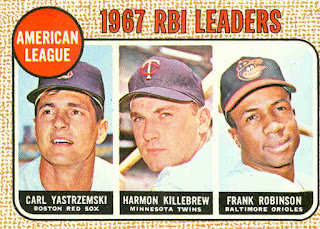 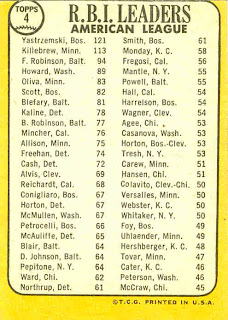 Yaz was one-and-done in the late-1960s' home run derby, while Killebrew and Frank Howard would make multiple appearances on these cards. 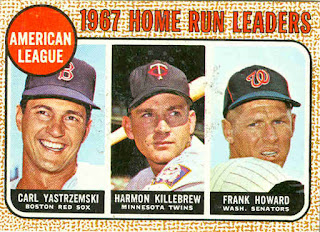 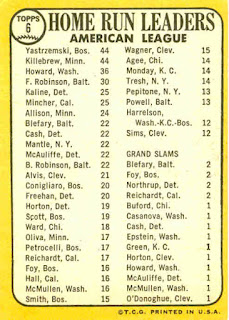 Posted by Jim from Downingtown at 10:01 PM 2 comments: 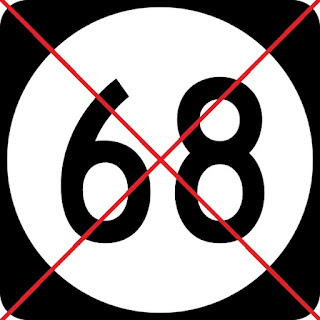 After all these years, I know exactly which players do and don't have a card in the 1967 set. I'm a little less sure about the players in the 1968 set. In the course of my travels through these blogs and my card binders over the past few years, I have discovered players that had their own "full" card in 1967 and 1969, but not a 1968 card.

Posted by Jim from Downingtown at 10:08 PM 4 comments:

Labels: ...players without a card

This is the last of Dick Hall's two Phillies' cards. Hall was traded from the Orioles during the winter of 1966-67, and returned to Baltimore after the 1968 season. Surprisingly, Topps was able to produce both of Hall's Phillies cards showing hin in a Phillies uniform, and not some airbrushed or capless travesty, which is how they handled the Turk Farrell and Don Lock cards for the several years they were with the Phillies.

Hall was signed by the Pirates as an outfielder in September 1951. He made his major-league debut in April 1952, but after sticking with the Pirates until mid-May, he was sent down to their class-B team, where he spent much of the '52 and '53 seasons.

He played the entire 1954 season with Pittsburgh, starting 84 games in the outfield. Dick began pitching in 1955, and split that season between the Pirates and their class-A team in Lincoln, Nebraska. After a full season with Pittsburgh in '56, he was in triple-A for most of 1957 and out of baseball altogether in 1958.

Hall returned in 1959 and compiled an 18-5 record in 27 starts for the Pirates' AAA team in Salt Lake City. After the season he was traded to the Kansas City Athletics, and spent one season in their starting rotation before moving on to the Orioles in April 1961. 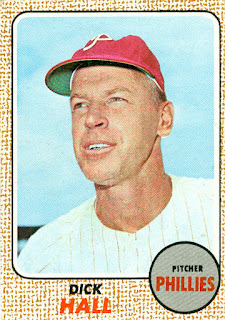 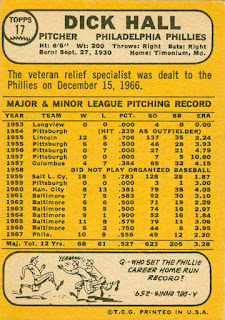 Hall spent his first season in Baltimore divided evenly between starting and relieving, but the next 5 seasons found him firmly entrenched as a bullpen mainstay for the Birds. He wrapped up his first stint with the O's as a member of the World Series champs in 1966.

After the season he was traded to the Phillies and spent 2 seasons co-closing with Turk Farrell, before returning to the Orioles in 1969, where he pitched in the World Series in each of his last 3 seasons before retiring after the 1971 season.

Hall was an amazing control pitcher!  Since becoming a full-time reliever in 1962, he pitched 780 innings, during which he only issued 61 unintentional walks.

This is the last baseball card for utility man Bob Saverine (#149). The first of his cards I got was the 1967 card, where (I thought back then) he looked like Jim Nabors. My only other thought about Saverine back then was this.

Bob was signed by the Orioles in 1959 and played 4 seasons in their system, then played one game with Baltimore in September 1962. After 2 full seasons as an INF/OF with the Orioles, Saverine was back in the minors for all of 1965. (He was traded to the Astros in April for veteran pitcher Don Larsen, but played for the Orioles' AAA Rochester team.) 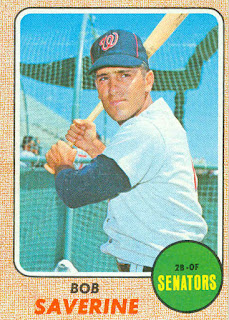 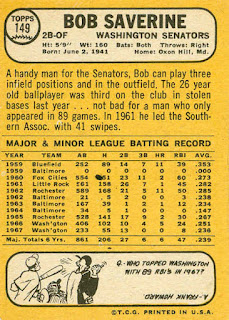 The Senators selected him in the Rule 5 draft following the 1965 season, and Bob spent all of '66 and '67 in Washington. In 1966 he started 67 games at 2nd base, more than veteran Don Blasingame and Ken Hamlin.

The Senators acquired Bernie Allen from the Twins in the off-season, so Saverine was relegated to utility infielder for 1967. His final big-league game was October 1, 1967. Saverine played for Washington's AAA team in Buffalo in 1968, then retired.
Posted by Jim from Downingtown at 11:08 AM No comments: