Jack Hamilton spent 8 years as a big-league pitcher, but unfortunately is most remembered for one grim event in 1967.

Jack was signed by the Cardinals in 1957, and spent 4 seasons in the low minors before the Phillies selected him in the minor-league draft following the 1960 season. After one season with the Phillies' class-A team in Williamsport, Pennsylvania, he made his major-league debut in April 1962. Appearing in 41 games in his rookie season, his 26 starts were 2nd on the Phillies behind Art Mahaffey's 39 starts. Unfortunately, Jack also led the league with 107 walks and 22 wild pitches. In 1963, he made 19 appearances for the Phillies, but played almost as many games for the team's AAA squad in Little Rock, Arkansas. 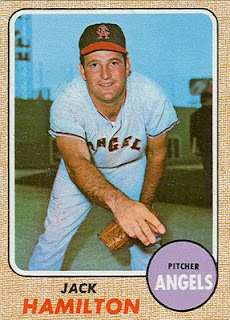 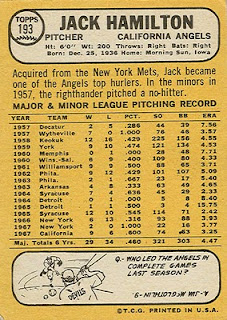 Jack's biggest contribution to the Phillies came after the 1963 season, when he was shipped off to the Tigers (along with outfielder Don Demeter) for pitcher Jim Bunning and catcher Gus Triandos. Hamilton spent the next 2 seasons with the Tigers, or, more accurately, as a starter with their AAA team in Syracuse. He did manage to play 9 games with the Tigers over 2 seasons.

The Mets purchased his contract after the 1965 season, and he became a fixture in New York's bullpen in 1966. He picked up 13 saves for the Mets, and led the relievers in games and innings pitched. Jack even managed to squeeze in 13 starts around his bullpen duties.

After 17 appearances in 1967, Jack was traded to the Angels on June 10th for pitcher Nick Willhite. He was used almost exclusively as a starter for the remainder of the 1967 season. On August 18th Hamilton was pitching against the Red Sox. With 2 out in the 4th inning, Jack severely beaned Boston right fielder Tony Conigliaro, which caused Conigliaro to miss the rest of 1967 and all of 1968.

1967 would be Hamilton's last full season in the majors. He became primarily a reliever in 1968, and divided his time between California and the Angels' triple-A team in Seattle.

After the 1968 season, Jack was traded to the Indians for pitcher Eddie Fisher (no, this one). After 20 relief appearances with Cleveland, he was traded on June 13th to the White Sox for pitcher Sammy Ellis. Hamilton only pitched in 8 games for the White Sox, the last coming on August 10th. He spent the rest on 1969 and all of 1970 pitching for the White Sox' AAA team in Tucson, AZ.