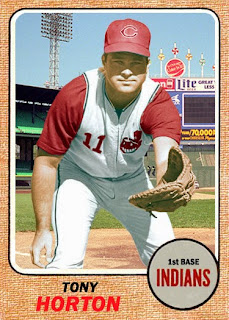 Tony Horton's SABR page.
Posted by Jim from Downingtown at 2:00 AM

I didn't realize Miller Lite was around in 1968.

I was at that game. Actually it was a midweek doubleheader. Maybe the most fun I've ever experienced in a ballpark. There was a serious fight at home plate between Stan Bahnsen and Vada Pinson. Bobby Murcer hit four homers and someone threw a huge firecracker out of the upper deck that exploded next to Ray Fosse and just about gave him, the ump and everyone else a heart attack.

All that in addition to Tony Horton's crawling antics.

Bob, I just read about all those antics last week somewhere on one of these blogs. The blogger was posting Vada Pinson's card, and the photo was taken seconds before or after that home plate collision.

He was an above average hitter for several years in the AL...I wonder why they never carded him?