Orlando was signed by the New York Giants in 1955. After 3 seasons in the minors, Cepeda began the 1958 season with San Francisco, and started 147 games at first base, en route to winning the Rookie of the Year award (only the 2nd player to win unanimously).

In late-July 1959, the Giants called up rookie Willie McCovey, moving Cepeda to left field for the rest of the season. Cepeda played most of 1960 in left field, but when McCovey spent the 2nd half of the season in the minors and on the Giants' bench, Orlando reclaimed the 1st base job. 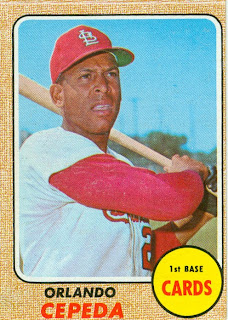 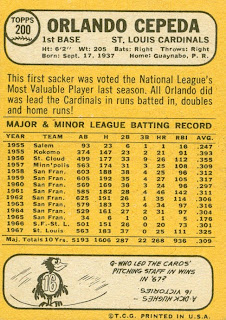 Orlando was traded to the Giants in May 1966 for pitcher Ray Sadecki. He spent 3 seasons in St. Louis (including his MVP season in '67 and World Series appearances in '67 and '68).

Cepeda only played 3 games with the A's when a knee injury ended his season. Released after the season, he hooked on with the Red Sox when the AL instituted the DH before the 1973 season. He DH'ed in 142 games, but never played the field or pinch-hit that season.

He was released after the 1973 season, and spent most of 1974 playing in Mexico, until the Royals signed him for the final two months of the season.

Cepeda was elected to the Hall of Fame in 1999 by the Veterans Committee.

Posted by Jim from Downingtown at 9:46 PM No comments:

Continuing the mini-series on "cards ending with "00", here is #500 Frank Robinson.

Prior to the 1966 season, Robinson came over to the Orioles in a big trade with Cincinnati. In his first season with the O's, he won the Triple Crown, the AL MVP, and the World Series MVP.

Still, that was 2 years ago, and since then Carl Yastrzemski won the 1967 Triple Crown and played in the World Series, and several members of the world champion Cardinals (Bob Gibson, Orlando Cepeda) had monster years. Was Topps making amends for "only" giving Robby #100 in the 1967 set? 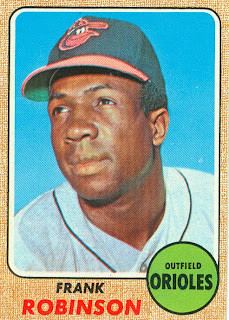 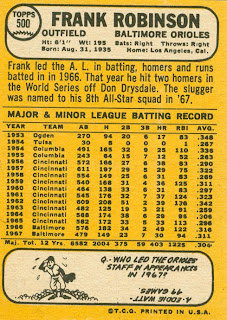 Posted by Jim from Downingtown at 10:37 PM No comments: