Now that we've finished with the Topps All-Rookie Team, let's check out the stars with '00' card numbers. Topps made a curious selection for some of their superstars (some folks refer to them as "hero cards").

Carl Yastrzemski was relegated to #250, while veterans Willie Mays and Mickey Mantle were #50 and #280 respectively.


In December 1966, Mike McCormick was traded by the Washington Senators to the Giants for pitcher Bob Priddy and outfielder Cap Peterson. Because Priddy and McCormick's 1967 cards were in the first series, they were still shown as members of their former teams, although some versions of their cards include a traded note on the back.

What did Mike do after escaping the DC Zoo? He led the NL with 22 wins in 1967, and was named the NL Cy Young Award winner, getting 18 of the 20 first place votes. The Sporting News also named him the NL Comeback Player of the Year. 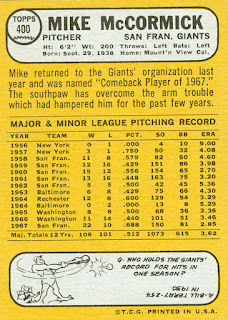 McCormick was signed by the New York Giants in 1956, after posting a 49-4 record in American Legion ball, and as a "bonus baby", went straight to the parent club. He made his major-league debut at age 17 on September 3rd, and pitched 6 innings over 3 games that year. In 1957, he appeared in 24 games, working mostly in relief.

After a down year in 1962, McCormick was traded to the Orioles with reliever Stu Miller and catcher John Orsino for pitchers Jack Fisher and Billy Hoeft, and catcher Jimmie Coker.

After 2 uneventful seasons with the Orioles (including spending much of 1964 in triple-A, his first taste of the minor leagues), Mike was dumped on the Senators for a minor-league pitcher and cash. He played in 40-plus games in each of his 2 seasons with the Senators, starting 50% in '65 an 75% in '66.

Returning to the National League in 1967 worked wonders for McCormick. He, Juan Marichal, and Gaylord Perry formed the big 3 in the Giants' rotation until Mike's July 1970 trade to the Yankees.

1971 was a traveling year for him: released by the Yankees in March, signed by the Royals in April, then released again on June 2nd. His final big-league game was on May 22, 1971.

Mike was signed by the Giants the following spring, but spent the 1972-73 seasons in the minors, before retiring.
Posted by Jim from Downingtown at 9:56 PM No comments: