Bill Dillman had cards in each Topps set from 1967-70. His rookie card was the only 1967 Rookie Stars card with red borders. (All the other 42 Rookie Stars cards had yellow borders.) In addition to having Orioles' cards in the '68 and '69 sets, his final card in the 1970 set shows him with the Cardinals. 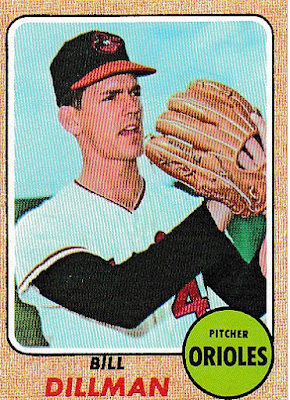 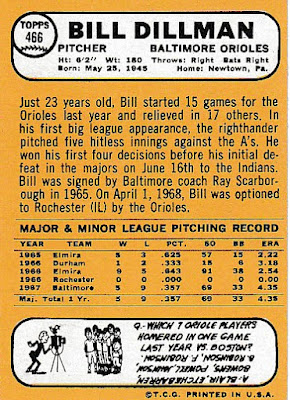 I was all ready to write about Dillman being part of the 1967-69 wave of Orioles' pitchers (along with Tom Phoebus, Jim Hardin, and Dave Leonhard) that followed the 1964-66 wave of Dave McNally, Wally Bunker, and Jim Palmer, but when I looked him up in Baseball-Reference.com today, I was surprised to see that he only pitched 32 games for the O's, all in 1967 (when their "main" pitchers were all out with sore arms).
The oddball "red rookie card" in the 1967 set: 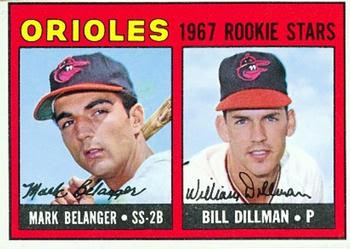 In 1968, McNally rebounded to win 22 games, while Hardin and Phoebus won 18 and 15 respectively. With rookie Dave Leonhard joining the team that year, and Bunker sharing the #5 starter job with Gene Brabender, there was no room on the roster for Dillman, so he spent the next 2 seasons pitching for their AAA Rochester club. (It's surprising then that he had a card in the 1969 set.)
After the 1969 season he was purchased by the Cardinals, so Topps gave him one more chance. However, early in the 1970 season (having not played for the Cardinals) he was traded to the Expos for Carroll Sembera, and pitched in 18 games for Montreal from May to July, then it was back to triple-A for the rest of that season and all of 1971.
Dillman finished out his career in 1972 with the Mets’ AAA team.
Posted by Jim from Downingtown at 11:42 AM 1 comment:

This is Mike Hegan’s first solo card. He previously appeared on a late-1967 Yankees Rookies card.
Hegan was the son of long-time Indians' catcher and Yankees' coach Jim Hegan. Mike was signed by the Yankees in 1961 and made his major-league debut in September 1964. 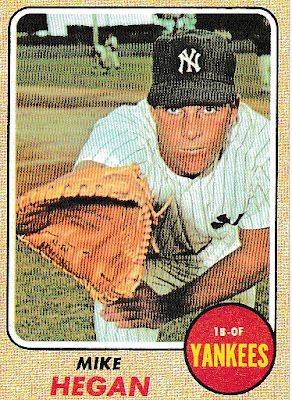 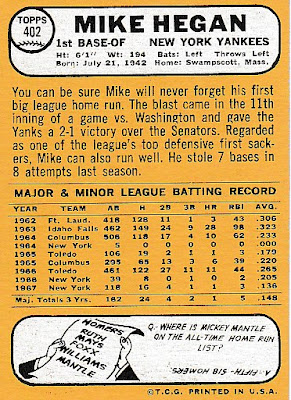 He was back in the minors for all of 1965 and most of 1966, but made the Yankees' squad in 1967. That was the year Mickey Mantle moved from center field to 1st base, so Hegan got into 68 games, mostly as a late-inning replacement for Mantle.
Hegan spent all of 1968 back in triple-A (his job as Mantle’s caddie taken by the newly-acquired Andy Kosco). In mid-June he was sold to the Seattle Pilots' organization, but as they did not have any teams in place yet, he remained with the Yankees’ Syracuse team through the end of the season.
He played for the Pilots in 1969, and was their primary right fielder. He also made the All-Star team that year (so the often-repeated statement that Don Mincher was the Pilots’ only All-Star is not correct).
Hegan played for the Brewers until mid-June 1971, and 3 years to the day he was acquired, the team traded him to the Athletics. Mike was sold back to the Yankees in late-1974, and (appearing to re-trace his career steps) he was acquired by the Brewers in early-1975, where he remained as a bench player until he was released in July 1977.
After his playing career, he was a commentator for the Brewers for 12 seasons, and then for the Indians for another 23 seasons.
Hegan passed away in 2013 at age 71.
Posted by Jim from Downingtown at 11:57 PM No comments: