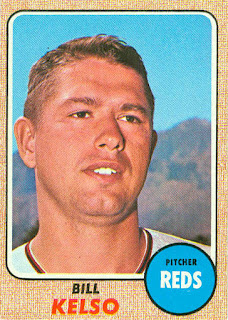 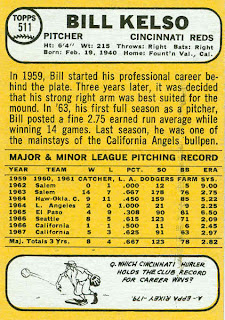 Philadelphia-area native Pete Cimino (#143) had a brief career in the mid-1960s. (Briefer than I realized before checking his past stats for this post. I always assumed he played a role in the Twins' 1965 World Series season.)

Cimino was a high-school basketball star, and once scored 114 points in a game.  From Wikipedia:
A star athlete at Bristol High School...Cimino might be best known for scoring 114 points in a high school basketball game on January 22, 1960. The single-game shooting outburst occurred during a 134–86 win over Palisades High School, in a Lower Bucks County League match. In the game, Cimino made 44 of 79 field goal attempts and 26 of 29 free throw attempts. He scored all 69 of his team's second half points. The 114-point total is still a Pennsylvania state record and is also the fourth highest in any United States boys high school game. 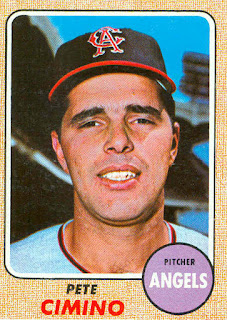 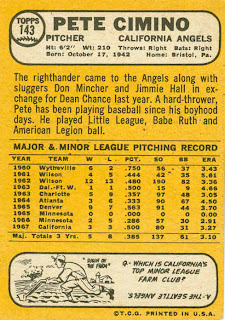 Pete was signed by the Washington Senators (soon to be Minnesota Twins) in 1960, and pitched 6 seasons in the minors, as a starter for 4 seasons, then primarily a reliever in '64 and '65. His major-league debut came on 9/22/1965, as he pitched the last inning in a 5-2 loss to the Orioles. It was his only appearance that season.

Cimino appeared in 35 games (all in relief) for the Twins in 1966, as the #2 reliever behind veteran Al Worthington (14 years his senior). After the season, he was packaged up with 1st baseman Don Mincher and center fielder Jimmie Hall, and sent to the Angels for 1964 Cy Young winner Dean Chance and shortstop Jackie Hernandez.

Pete's time as an Angel was pretty much just 1967, where he was the team's #3 reliever behind ace Minnie Rojas (27 saves) and rookie Bill Kelso (11 saves), and ahead of aging veterans Lou Burdette and Jim Coates.

After only 4 games in 1968, Cimino was sent down to the minors in mid-May, and spent the rest of the season with the Angels' AAA and AA clubs. It was his last pro season.
Posted by Jim from Downingtown at 7:23 PM 2 comments:

This is the first and last card for Clarence Jones (#506). For the second consecutive post, we are saying goodbye to a short-time Cubs' first baseman.

Jones was signed by the Phillies in June 1959. After finishing that season in the Phillies' organization, he was out of baseball in 1960. Clarence returned in 1961, and spent the next 5 seasons in the Dodgers' farm system. 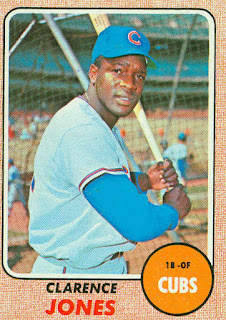 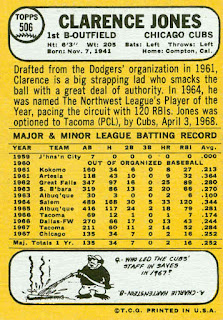 After the 1965 season, he was drafted by the Cubs, and finally made it up to triple-A during the 1966 season.

Jones made his major-league debut in April 1967 with the Cubs. He played in 53 games that year, mostly as a pinch-hitter, but also 2 dozen games in right field and a dozen as Banks' backup at 1st base. He also spent mid-May to mid-July back in the minors.

The following season, he was back in triple-A for most of the season, only playing 5 games with the Cubs in September. After the '68 season he was dealt to the Reds, but spent the 1969 season at triple-A Indianapolis.