Packing Up This Blog (fittingly, into a burlap sack)

As I mentioned in my 1967 blog post today, I am discontinuing my blogs. (Many would say "I thought you did already.")   When it becomes a chore rather than fun, it's time to leave.

I was nearing the end anyway, having only three other 1968 cards that I planned to post (Ramon Hernandez, Greg Goossen, and Jim Campanis), but I don't think anyone will miss them.

This 1968 box photo reminds me of when I was collecting cards by-the-pack back in 1967-69.  I would band the cards for each team together, and have an "NL box" and an "AL box".  (Checklists and leaders would fit in wherever there was room.)

Our local corner store would let us take empty boxes home if we bought the last pack(s) in it.

Not all boxes had the playing cards pictured on the front panel, but I don't remember which series they were inserted in (I want to say 2nd thru 4th).

If you haven't seen it already, please scroll down to the end of the sidebar to read comments about the set that I wrote, and posted on Zistle some years ago.
Posted by Jim from Downingtown at 12:53 AM No comments:

George Culver pitched for 6 teams over 9 seasons. In that time, he appeared in 335 games, mostly as a reliever. He was only a full-time starting pitcher during his first season with the Reds (1968), and once he left the Cardinals in June 1970, he never started another game. 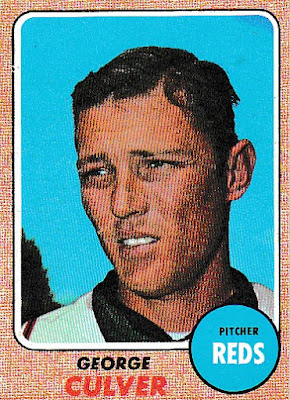 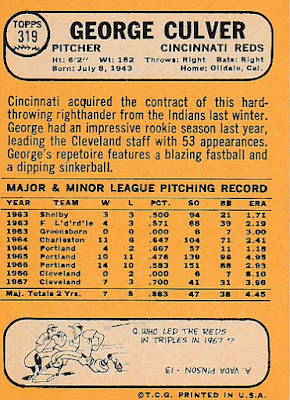 He was originally signed by the Yankees in May 1963 (I did not know that). After that season the Indians claimed him in the first-year draft.

Culver made his major-league debut in September 1966, pitching 5 games (9 innings). He led the Indians’ staff with 53 appearances during his rookie year in 1967, but was traded away to the Reds for outfielder Tommy Harper after the season.

As mentioned, he was a starting pitcher in 1968, and posted career highs in wins (11), innings (226), and strikeouts (114). He also pitched a no-hitter against the Phillies that summer. The following year he moved to the bullpen, but also started 10 consecutive games in June and July.

After the 1969 season he was on the move again, this time to the Cardinals for veteran pitcher Ray Washburn. He hardly had time to unpack when he was shipped off to the Astros in June for Jim Beauchamp and Leon McFadden. George found a home in the Astros’ bullpen for the next 2 ½ seasons, as a setup man for closer Fred Gladding.

The Dodgers purchased his contract during spring training in 1973, but by August they put him on waivers, where he was claimed by the Phillies.

Culver finished out his career pitching for Philadelphia for the last 2 months of ’73 and the first half of 1974. He was released at the end of June.

He pitched the remainder of ’74 and part of ’75 for the Phillies’ AAA team, then finished up 1975 in Japan. George also made a few appearances for Phillies’ minor league teams in ’81, ’82, and ’85, but that was as a temporarily re-activated pitching coach.

He spent 30 years as a minor-league manager and coach in the Phillies’ and Dodgers’ organizations.

Posted by Jim from Downingtown at 11:30 PM No comments: