Bob Barton was a journeyman catcher for the Giants and Padres. His only season as an everyday player came in 1971 with the Padres.

Barton was signed by the Giants in 1959 and started out with the Class D Hastings (Nebraska) Giants. By 1963 he made it to the triple-A level, where he remained for another 5 seasons. He did get a cup of coffee with the Giants in September 1965.

He began the 1966 season with the Giants, backing up starter Tom Haller. By mid-season he was demoted to triple-A Phoenix, with veteran 3B/C Ozzie Virgil called up to replace him. Barton alternated with prospect Dick Dietz and veteran Dick Bertell while at triple-A.

In 1967 the Giants decided to keep Dietz as Haller’s backup, and with another catching prospect (Don Bryant) slated to play for Phoenix, Barton was loaned out to the Cubs’ AAA team for most of the year. 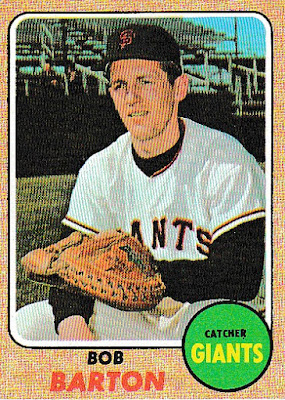 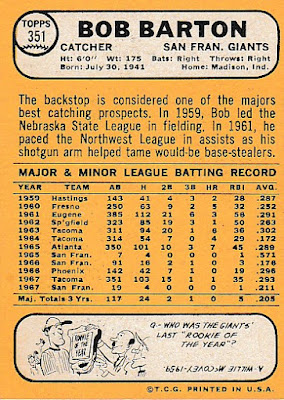 Haller was traded to the Dodgers after the 1967 season, so Barton made the Giants on a full-time basis as the 3rd-string catcher (behind Dietz and Jack Hiatt). Bob played in 45 to 50 games each season, and started about half that many. He was almost never used as a pinch-hitter (whereas Hiatt not only pinch-hit, but played first base too).

After the 1969 season, Barton was traded to the Padres along with pitcher Ron Herbel and 3rd baseman Bobby Etheridge for pitcher Frank Reberger. This was an immediate promotion to 2nd-string status. He started a third of the games behind the dish in 1970, with Chris Cannizzaro starting most of the other games.

In 1971 Bob finally made it to the top, starting 111 games, while rookie Fred Kendall and Cannizzaro gave him some days off. He had career highs in at-bats, runs, hits, doubles, triples, homers, RBI, and walks. Topps even selected him for an “In-action” card in their 1972 set, although I’m not sure how this qualifies as “action": 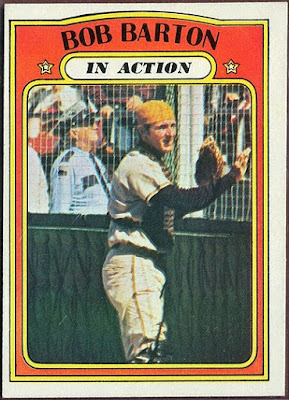 Barton: “Hey, what’cha doin?”
Guard: “Not much. What’choo doin?”
Barton: “Not much.”
It turned out, Bob was just keeping the spot warm for Kendall, who took over the starter’s job in 1972. In mid-June he was traded to the Reds for Pat Corrales, but did not play for the Reds (or in the minors) in the second half.

After only catching 5 innings for the Reds in the first month of 1973 (hey, they had Johnny Bench!) he was released in mid-June. As in the previous year, he was idle for the remainder of the season.

The Padres signed him in April 1974, and he played in 30 games as their 2nd-string catcher, then was released at the end of the season, ending his 10-year career.

Posted by Jim from Downingtown at 7:00 AM No comments: