Wilbur began the 1963 season with the Sox’ AAA team in Seattle, but was recalled in early June and pitched in 25 games over the final 2/3 of the season.

Wood opened the ’64 season in Boston, but was sent back to Seattle in mid-May, where he remained until the Pirates purchased his contract in September. He made a few appearances with the Bucs in the season’s final weeks. 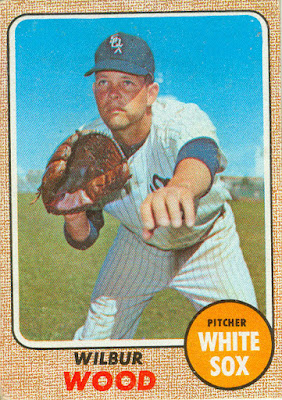 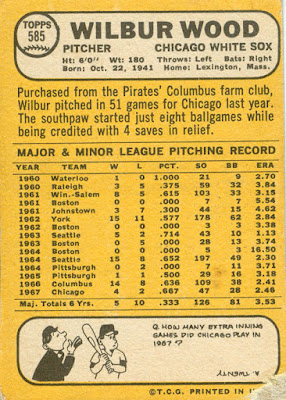 1965 was his last season with Pittsburgh. He pitched in 35 games (all but 1 in relief) but only compiled a 1-1 record. After little success in 1965, Wood spent the entire ’66 season with the Pirates’ AAA team, compiling a 14-8 record in 31 games as a starter. For his efforts, he was traded to the White Sox after the season for pitcher Juan Pizarro.

Upon joining the Chisox, their resident knuckleball guru Hoyt Wilhelm convinced Wilbur to throw only the knuckleball, and Wood’s career took off. He was a reliever during his first 4 seasons with Chicago (leading the league in games in ’68, ’69, and ’70, and notching double-digit saves in those 3 years.

Wood was still a workhorse in 1975 (pitching 291 innings), but slipped to a 16-20 record. He missed much of the 1976 season after a line drive broke one of his knees. Wilbur returned for 2 more seasons, but without his earlier effectiveness. His final game was in August 1978.

Wood was granted free agency after the 1978 season, but had no takers.

Posted by Jim from Downingtown at 10:40 PM No comments: