Back on Topps' Radar: Nate Oliver

Nate was signed by the Dodgers in 1959, and spent the next 4 seasons in their farm system before making his major-league debut in April 1963. From 1963 to 1967 he shuttled between Los Angeles and their triple-A team in Spokane, playing a good amount of time in the majors (except for 1965). 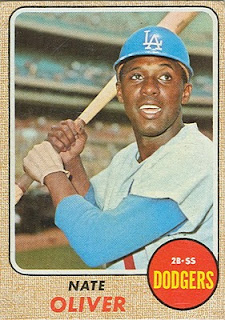 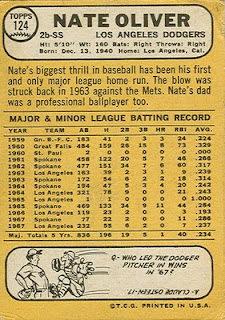 Prior to the 1968 season, Oliver and 2nd baseman Ron Hunt were traded to the Giants for starting catcher Tom Haller. After just 1 season in San Francisco, he was shipped to the Yankees for pinch-hitter (and former 3rd baseman) Charlie Smith.

Two weeks into the 1969 season, the Yankees traded him to the Cubs for minor-league infielder Lee Elia. That was his last major-league season. Nate spent the 1970 and 1971 seasons in triple-A before retiring.
Posted by Jim from Downingtown at 8:57 PM No comments:

This is the final card for Jerry Zimmerman (#181) the Twins' backup catcher for most of the 1960s.

Jerry was signed by the Boston Red Sox in 1952. After 7 1/2 seasons in their minor-league system, the Red Sox released Zimmerman on July 16, 1959. On the same day, he was picked up by the Orioles, who assigned him to their triple-A team, where he played until being released on September 25th (presumably after the end of the minor-league season). Not to worry! For the 2nd time in 1959, Jerry was picked up by another team on the same day he was cut (this time by the Cincinnati Reds).

Zimmerman got a fresh start with the Reds. After spending one season (1960) with the Cincy's triple-A team, he made his major-league debut on April 14, 1961. He ended up being the Reds' #1 catcher as a rookie, starting more games behind the plate (64) than the #2 and #3 guys combined (Johnny Edwards & Bob Schmidt). 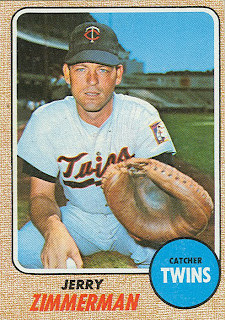 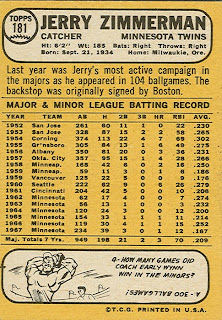 What happened after that? The Reds must have liked what they saw of Edwards, because in 1962 he began a string of 6 years as the Reds' #1 catcher (until being replaced by Johnny Bench in September 1967). Zimmerman was shipped off to the Twins in January 1962 for outfielder Dan Dobbek, who had all of 200 major-league games under his belt, but would never play in the majors again.

Jerry played for the Twins for the remainder of his career. From 1962-66 he was 2nd-string behind Earl Battey. In 1967, he was the #1 catcher, as the aging Battey faded drastically in his final season. Oddly enough, in 1968 Jerry dropped to #3 behind the newly-acquired John Roseboro and rookie Bruce Look.

Zimmerman was released in March 1969. (None of the 4 expansion teams needed a veteran catcher?)
Posted by Jim from Downingtown at 11:04 PM No comments:

However, he was a valuable pinch-hitter, and before that, a full-time player in the early 1960s.

Thomas was signed by the Yankees in 1954, then played for seven seasons as an outfielder with their minor-league teams before making his major-league debut in April 1961.

Of course, with the likes of Mickey Mantle, Roger Maris, Yogi Berra, and Hector Lopez taking up space in the Yankees' outfield, Lee's prospects for playing time weren't very good. After 2 pinch-hitting appearances, he was packed off to the Angels on May 8th in a 5-player deal. 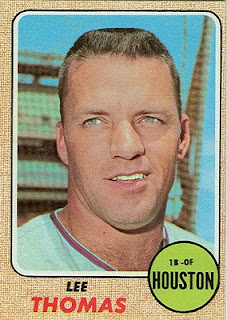 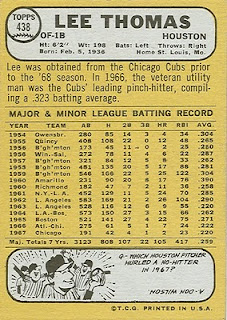 In 1964, after starting 44 of the first 49 games in right field, Thomas was traded to the Red Sox on June 5th for outfielder Lou Clinton (who had been Boston's regular right fielder since mid-September 1961). Lee started almost every game in right for the remainder of the season.

Thomas took over as the Red Sox' regular first baseman in 1965 (due to a combination of Tony Conigliaro moving to rightfield, and long-time stonehands/1st baseman Dick Stuart moving on to Philadelphia).

After the season, Lee's time in Boston was over, since the Red Sox planned to have minor-leaguer George Scott take over the first base job in 1966. In December 1965 Thomas was traded to the Braves, but the following May he was sent on to the Cubs.

His time with the Cubs was spent as mostly as a pinch-hitter. In February 1968, the Cubs traded him to the Astros for 2 minor-leaguers who never made it to The Show. Lee finished the 1968 season with Houston. He played in Japan in 1969, and finished his career with the Cardinals' triple-A team in Tulsa.

In later years, he would become the Phillies' general manager during the early 1990s.
Posted by Jim from Downingtown at 6:49 PM No comments:

Chuck Hiller (#461) was signed by the Indians in 1957, and played 2 seasons in their low minors before the Giants selected him in the 1958 minor-league draft. After 2 more seasons in the Giants' organization, Hiller made his major-league debut with the Giants on April 11, 1961.

After starting 16 of the first 17 games at 2nd base, Chuck slowly lost his grip on the starting job to Joey Amalfitano, and by season's end, Chuck had 63 starts (to Amalfitano's 88).

Amalfitano was lost in the post-season expansion draft, so Hiller was now in full control at 2nd base, starting 158 games in 1962, and 101 games in 1963 (alternating with the re-acquired Amalfitano). 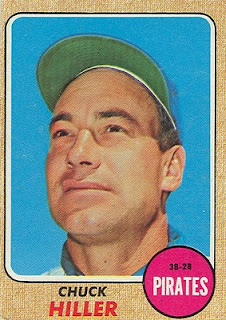 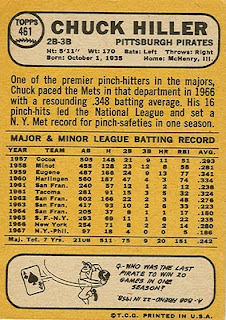 In 1964, rookie Hal Lanier got the bulk of playing time at 2nd, relegating Hiller to a backup role. Eventually, Chuck was sold to the Mets on May 11, 1965. In New York, he was in a 3-way timeshare at 2nd base with Bobby Klaus and Ron Hunt.

Hunt took over the 2nd base job in 1966, pushing Hiller to his now-familiar role as utility/pinch-hitter. In July 1967, the location changed (Phillies) but not the job.

After the 1967 season, the Pirates selected him from the Phillies in the rule 5 draft. After 11 games with the Pirates in 1968 (the last on June 2nd), Hiller's 8-year major-league career was over.

He spent the remainder of 1968 with the Pirates' triple-A team in Columbus, Ohio before retiring.
Posted by Jim from Downingtown at 9:32 PM 2 comments: 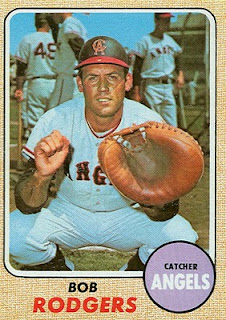 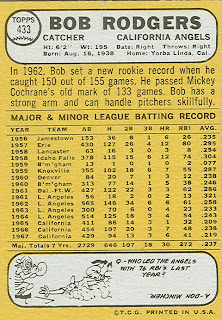 Tonight, my blogs feature another triple-shot of Cincinnati Reds (for no particular reason). However, these 3 cards don't match as well as Zanni-Coker-Nottebart did a few days ago.

Jimmie was signed by the Cardinals in 1955, and spent six full seasons and part of 1961 in the minors before making his major-league debut on May 20, 1961. That season, he started 45 games behind the plate - the most by any of the 6 catchers used by the Cardinals that season. 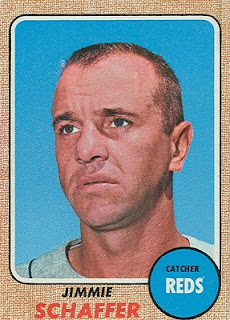 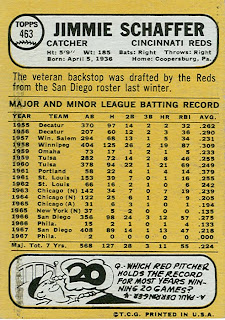 In 1962, Schaffer settled back into the backup role (behind Gene Oliver and Carl Sawataski) that would follow him for the rest of his career. After the season he was traded to the Cubs (along with pitchers Larry Jackson and Lindy McDaniel) for pitcher Don Cardwell, outfielder George Altman, and catcher Moe Thacker.

Jimmie was the Cubs 2nd-string catcher (behind Dick Bertell) for the 1963 and 1964 seasons. He was traded to the White Sox in December 1964, and split the 1965 season between the White Sox and the Mets. That was pretty much the end of Schaffer's major-league career.

Prior to the 1966 season, Schaffer was one of three players the Mets traded to the Phillies for first baseman Dick Stuart. Jimmie spent the 1966 and 1967 seasons with the Phillies' triple-A team in San Diego, getting only a few at-bats in September call-ups each season. 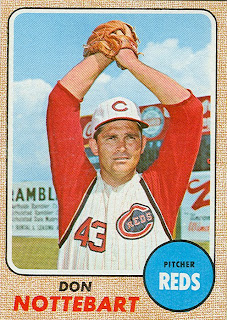 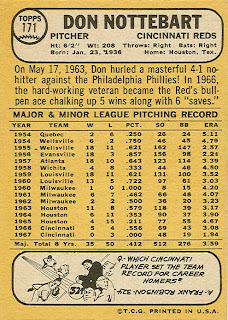 Don spent the 1970 season in the Cubs' farm system. His final baseball card was in the 1969 set.
Posted by Jim from Downingtown at 11:04 PM No comments: