He began the 1966 season with the Angels, but with a 3-1 record in 19 games, he was sent down in July for the remainder of the season. 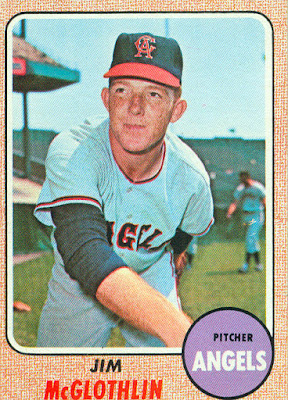 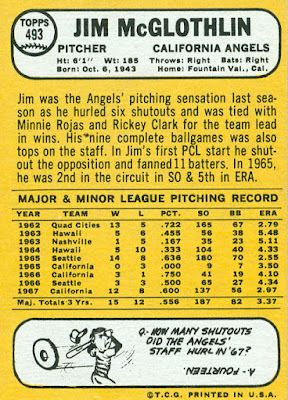 Jim returned to the Angels to start the 1967 season and was among the team’s top 3 starters (with George Brunet and Rickey Clark), posting a 12-8 record while leading the league with 6 shutouts. He also made his only All-Star team that year (the game was played in the Angels’ park).

McGlothlin was near the top of the Angels’ rotation for 2 more seasons, with Brunet, Clark, and Sammy Ellis, who was acquired from the Reds prior to 1968. (For years thought the Angels had traded McGlothlin to the Reds for Ellis.)

After the 1969 season, Jim was traded to the Reds (along with pitchers Pedro Borbon and Vern Geishert) for outfielder Alex Johnson and infielder Chico Ruiz.

Like the Reds’ team in general, Jim’s production slipped in 1971, compiling a 8-12 record.

In 1972 he went 9-8, and moved farther down the rotation ladder that season, while also relieving in several games. The Reds went to the World Series that year, and Jim pitched in 2 post-season games.

McGlothlin played most of 1973 with the Reds, but was traded to the White Sox for pitcher Steve Kealey in late August. The White Sox released him in March 1974.