Jim Palmer was a key part of the Orioles pitching staff for almost 2 decades. 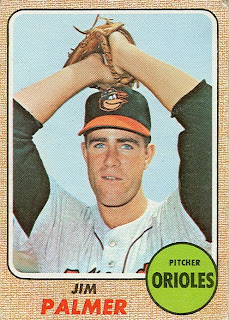 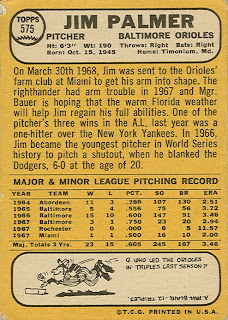 His major-league career began in 1965. Since the rotation was already capably manned by Milt Pappas, Steve Barber, Dave McNally, and Wally Bunker, Palmer found himself as the #3 man in the bullpen behind Stu Miller and Dick Hall. He did manage to make 6 starts to go along with his 21 relief appearances.

Palmer's potential enabled the Orioles to trade Pappas to the Reds for Frank Robinson prior to the 1966 season. In his 2nd year, Palmer joined the starting rotation and made 30 appearances (all starts). He was the #2 starter in innings (behind McNally), with Bunker and Barber completing the rotation. The top-notch pitching, along with Frank Robinson's triple crown season, led the Orioles to a World Series championship.

In 1967, the wheels fell off the entire starting rotation, with Palmer affected the most. Because of a sore arm, he made only 9 starts for Baltimore in 1967. He was sent down and only played 34 innings combined in A and AAA ball. The Orioles dropped to 6th, as McNally and Bunker were also having problems.

In 1968, he wasn't on the Orioles at all, and only managed to pitch 37 innings combined for 3 Orioles farm teams. (Back then, the Orioles were my "A.L. team", and Palmer was one of my favorite players. I remember thinking at the time that Palmer was done.) Meanwhile, the Orioles rebounded to 2nd place, thanks to McNally's comeback season of 22 wins.

In 1969, Palmer was back, with 16 wins. Mike Cuellar was acquired from the Astros (for Cury Blefary - what a steal!), and posted 23 wins. McNally won 20 games, and the Orioles finished in 1st place, meeting the Mets in the World Series.

In 1970, Palmer began a string of winning 20 or more games 7 times in 8 years. The rest is well-known history.
Posted by Jim from Downingtown at 8:48 PM

I like this one because Palmer looks so young (and not particularly handsome). I make fun of it here: