Here we see Rusty in Topps' patented 1968-69 Astros' regalia. (They forgot to airbrush-out the reflection of the Astros' logo on the helmet bill!) Staub is entering his final year in Houston, as he would become the Montreal Expos' "Le Grand Orange" in 1969. 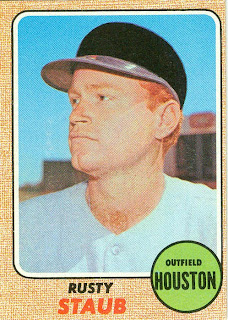 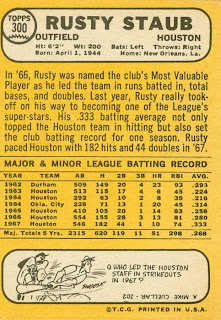 He was the starting 1st baseman for the first half of 1964, but lost the job to Walt Bond in early July. Rusty was the team's regular right fielder from 1965-67, then moved in to 1st base for the 1968 season.

In January 1969, he was traded to the expansion Expos for outfielder Jesus Alou and 1st baseman Donn Clendenon. When Clendenon refused to report (having had enough of manager Harry Walker while both were with the Pirates), the Expos sent pitchers Jack Billingham and Skip Guinn. Staub was an immediate hit in Montreal (see comment #5 here). Dubbed "Le Grand Orange", he was one of the Expos' bright spots in their early years. In his 3 seasons with the Expos, he averaged 160 games played as the team's right fielder, and made the all-star team each year.

In July '79, he returned to Montreal for the remainder of the season. After one season (1980) with the Rangers, Staub spent the rest of his career (1981-85) with the Mets, mostly as a pinch-hitter.
Posted by Jim from Downingtown at 10:47 PM