Who didn't get a card, but shoulda...

Today, I'm continuing to pick at the shortcomings my analysis of the 1968 set.

As I posted earlier with the 1966 and 1967 sets, here is a list of some of the players who didn't appear on a regular or rookie card in this set, along with the number of games played in 1968: 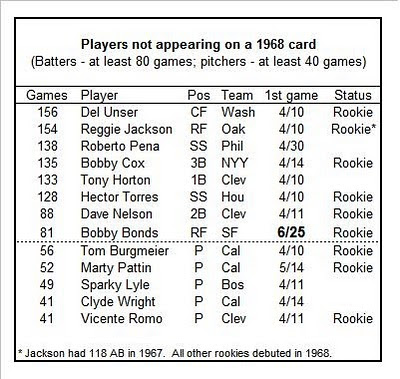 Most of these are rookies who made their debut in 1968. Reggie Jackson is a different case. He made his debut with the Athletics in June 1967, but in 118 at-bats in 35 games, he only hit 1 home run. Maybe this caused Topps to write him off as a non-factor. Fortunately for us, our fellow blogger Steve at White Sox Cards has filled the gap.

Bobby Bonds wasn't called up until late June, but he had been tearing up the minor leagues for over a year. Other rookies who grabbed a starting job at the start of the season included Del Unser and Bobby Cox (who both made the Topps 1968 all-rookie team).

Non-rookies without a card were Indians' 1st baseman Tony Horton (who never had a card in his 6-year career), Roberto Pena (a journeyman shortstop who joined the Phillies in late April and took over the starting job in May for the injured Bobby Wine), and Red Sox pitcher Sparky Lyle.

I can't imagine how Topps could have overlooked Reggie Jackson and Bobby Bonds for their teams' rookie cards, but almost all of these players could have been added to the 7th series, which was months away. (Did we really need all those extra Mets cards?)

Posted by Jim from Downingtown at 2:13 PM

Did we need all those extra Mets cards? Yes. Yes we did.