Len Gabrielson was a corner outfielder for 5 teams in the 1960s.

He was signed by the Milwaukee Braves in 1959, and made his major-league debut for the Braves with 4 games in September 1960.

After that brief cup of coffee, it was back to the minors until 1963. That season he played 46 games with the Braves (mostly as a pinch-hitter or 1st baseman) in April, May, and September, while spending the middle of the season in the minors. 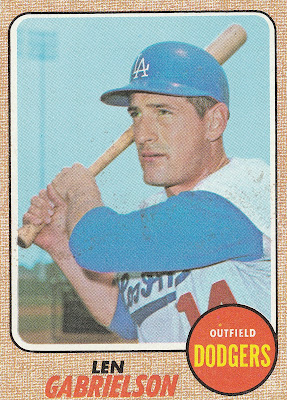 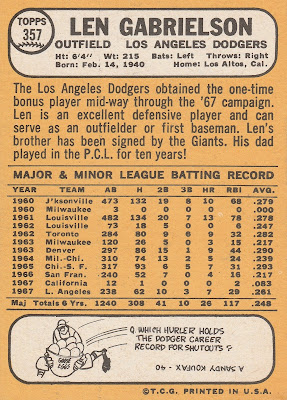 Len finally became a permanent major-leaguer in 1964. He played in 24 games for the Braves, then was traded to the Cubs in early June for catcher Merritt Ranew. Gabrielson started 71 of the Cubs’ final 84 games that year, taking over the right field job vacated with the trade of Lou Brock to the Cardinals.

In 1965, Doug Clemens (one of the players acquired for Brock in 1964) took over Gabrielson’s starting right field job, so after a handful of games Len was traded to the Giants in late May (along with catcher Dick Bertell) for pitcher Bob Hendley, catcher Ed Bailey, and outfielder Harvey Kuenn. Willie Mays and Jesus Alou had the CF and RF spots sewn up, so Len had to fight for playing time in left field with Matty Alou, Cap Peterson, and others. He did start 88 games there, more than any of the others.

Rookie Ollie Brown joined the Giants in 1966, further eating into Gabrielson’s playing time. After the season he was traded to the Angels for backup first baseman Norm Siebern.

This is where I jumped on the baseball bandwagon. My first knowledge of Gabrielson is his 1967 baseball card showing him as an Angel, but he only played 11 games for them before he was flipped to the Dodgers in May ’67 for utility player John Werhas.

Len was a corner outfield backup for most of his time with the Dodgers. His playing time spiked up in 1968, when Al Ferrara was lost for the season with a broken leg after just 2 games. Surprisingly, Gabrielson led the Dodgers with all of TEN home runs in 1968.

His father (also Len) played briefly with the Phillies in 1939.
Posted by Jim from Downingtown at 11:40 PM