Since starting this blog on 9/28/09, there have been 63 posts, representing every team except the Washington Senators, so...

After the 1964 season, he was sold to the Senators. In his first season with the Senators, Fred was the 4th outfielder behind Don Lock (CF), Chuck Hinton (LF), and Jim King (RF). Fred played all 3 positions, and was also frequently used as a pinch-hitter. 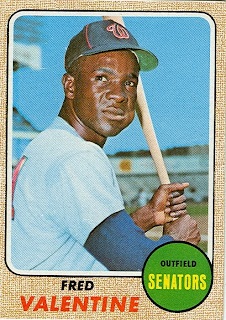 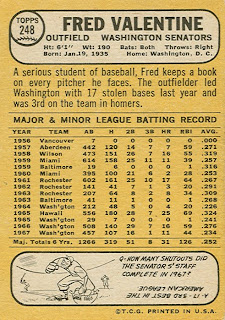 After acquiring outfielder Willie Kirkland in August 1964, and Frank Howard from the Dodgers before the 1965 season, the Senators' outfield became very crowded, so Valentine spent all but 12 games in triple-A that season.

In 1966, Fred was back in the big leagues, and played more games in the Senators' outfield than anyone. He started 55 games in center and 64 games in right, alternating with Don Lock and Jim King, respectively.

After the 1966 season, Don Lock was traded to the Phillies, 5th outfielder Willie Kirkland was sent to the minors, and in June 1967, Jim King was traded to the White Sox. However, a new batch of outfielders (Cap Peterson, Hank Allen, Ed Stroud) came on board, competing with Valentine for playing time. Fred started about a third of the games in center field (with Allen and Stroud evenly starting the rest), and started 50+ game in right field, where Peterson was the regular. Valentine was also occasionally used as a defensive replacement for Frank Howard in left field.

1968 was the end of the line for Valentine. 23-year-old rookie Del Unser (10 years younger than Valentine) took over the center field job, starting 154 games. Valentine started 24 of the first 56 games in right field, then was traded back to the Orioles on June 15th for pitcher Bruce Howard.

With the Orioles, Fred's situation declined, as the O's had 7 other outfielders, all getting more playing time than him. Fred was used mainly as a pinch-hitter and late-inning outfield sub.

His last major-league game was on September 24th, 1968. He spent the 1969 season with the Orioles' triple-A team in Rochester.
Posted by Jim from Downingtown at 12:29 PM