Robinson began his career playing for unaffiliated teams in the low minors in 1954 and 1955. In each of those seasons, he made brief appearances with the unaffiliated San Diego Padres of the Pacific Coast League. In 1956 San Diego became an affiliate of the Cleveland Indians, so Robinson's contract was acquired by the Indians.

After 2 full seasons with San Diego, Floyd missed the 1958 and 1959 seasons due to military service. In 1959, Robinson (and in fact, the entire San Diego team) was acquired by the White Sox. After one more season in the minors, Floyd made his major-league debut with the White Sox on August 10, 1960. Chicago's outfield in 1960 consisted of Minnie Minoso in left, Jim Landis in center, and Al Smith in right. Robinson started the final 11 games of the season in right field. 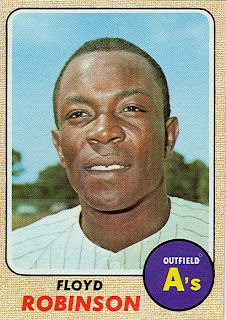 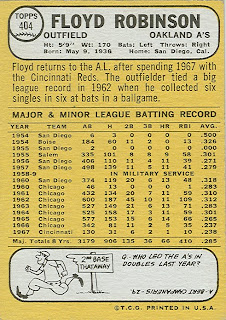 In 1963, the Sox acquired Dave Nicholson from the Orioles to play left field, so it was back to right field for Robinson, starting 117 games there and 16 in left. 1964 was more of the same (regular right fielder, primary backup in left) for Robinson.

After the 1966 season, he was traded to the Reds for pitcher Jim O'Toole. Floyd's time in the NL only lasted 1 season, as he was shipped to the Athletics for pitcher Ron Tompkins. After a short time with the A's, Floyd was sold to the Red Sox on July 31st. He was released after the season, ending his 9-year career.
Posted by Jim from Downingtown at 5:34 PM

Turns out he was born in the town where I now reside: Prescott, AR! Wahoo!