Back on Topps' Radar: Diego Segui

Segui was signed by the Cincinnati Reds prior to the 1958 season, but released in early April. He caught on with the Tucson Cowboys, an independent team in the class-C Arizona-Mexico league. At the end of the 1958 season, he was acquired by the Kansas City Athletics.

Diego spent the next 3 seasons in the Athletics' farm system before making his major-league debut in April 1962. For his first 2 seasons, he was a starter and reliever. In 1964, he was primarily a starter. His 35 starts led the Athletics staff. Unfortunately, his 17 losses was the most in the American League. In 1965, he returned to a combined starting/relieving role. 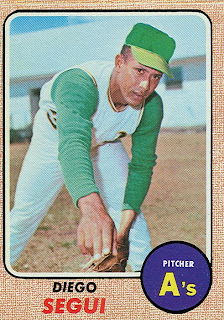 (at least Topps used green to airbrush his cap!) 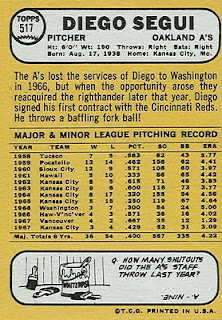 Two days after the 1966 opener, Segui was sold to the Washington Senators. By the end of July (after 21 appearances), the Nats traded him back to Kansas City for pitcher Jim Duckworth. However, he was relegated to triple-A for the rest of the season (hence, no 1967 baseball card!)

In 1967 Diego started 7 games in triple-A, and appeared in 36 games for Kansas City (only 3 starts). Segui was strictly a reliever in 1968, making 52 appearances as the #2 man in the bullpen behind "closer" Jack Aker.

Segui was selected by the Seattle Pilots in the 1969 expansion draft. (Later in the draft, the Pilots also plucked Aker from the A's bullpen.) Segui led the Pilots in saves (12), games (66), winning percentage (.667), was second in wins (12) and 1st among relievers in innings (142). His fine performance earned him a ticket out of Expansionville as he was traded back to the Athletics in December 1969 (along with shortstop Ray Oyler) for infielder Ted Kubiak and pitcher (and frequent Topps' "Rookie Star") George Lauzerique.

He spent the 1974 and 1975 seasons in the Red Sox' bullpen, and was released in spring training in 1976. The Padres signed him, but kept him in triple-A all season.

Segui wrapped up his 15-year career in 1977 with the Mariners.

His son David played for the Orioles and other teams from 1990-2004.
Posted by Jim from Downingtown at 9:34 PM

Topps may have got the color right , but what's with that shape? Who did he steal it from, Herman Munster?