Tom Haller was a catcher for the Giants and Dodgers in the 1960s. Here we see him on his last card as a Giant. He was traded to the Dodgers prior to the 1968 season for Ron Hunt, but both players appear as Giants in the ’68 set.

After playing quarterback at the University of Illinois, Haller was signed by the Dodgers in 1958. After 3 seasons in the minors, Tom began 1961 with the Giants, but spent the 2nd half of the season back in the minors. 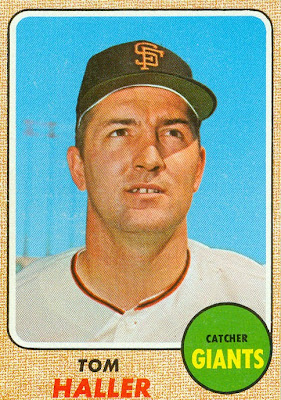 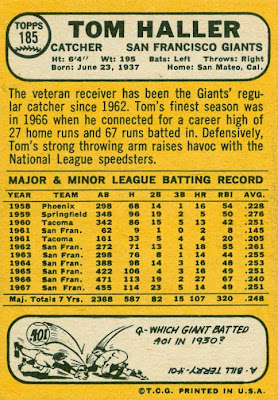 In February 1968 (with rookie catcher Dick Dietz ready for regular playing time) Haller was traded to the Dodgers for 2nd baseman Ron Hunt and utility infielder Nate Oliver. It was the first trade between the two teams since their move to California in 1958.

Tom was immediately installed as the starting catcher in LA, taking over for John Roseboro, who had been traded to the Twins 3 months earlier. Haller made his 3rd consecutive all-star squad in 1968, then continued as the #1 catcher in 1969.

In 1970 he started 91 games behind the plate, with backups Jeff Torborg and Bill Sudakis (the team’s starting 3rd baseman in 1969) splitting the remaining games.

In 1971, Tom shared the starting catching duties with Duke Sims (acquired from the Indians), with rookie Joe Ferguson also getting a few dozen starts as the 3rd-stringer.

Haller was traded to the Tigers after the 1971 season, and spent the ’72 season backing up perennial all-star Bill Freehan. By early August, Tom’s old pal Duke Sims was acquired from the Dodgers, and joined the catching mix. Haller only started 4 games after Sims’ arrival.

During one start in July 1972, Haller was catching, while his older brother Bill (an American League umpire) was working behind the plate.

The Phillies acquired Haller before the 1973 season, mostly to serve as a mentor and insurance policy for Bob Boone, who, after a cup of coffee in September ’72, would be handed the starting catching job in 1973. Haller decided to retire, rather than accept a trade to the Phillies.