What a rookie season! After finishing no higher than 6th place for the previous 7 seasons (including two 9th and two 8th place finishes), the Red Sox gave Dick Williams his first big-league managing job in 1967, and he guided the team to their first World Series since 1946. Unfortunately, just as in ‘46, the Sox lost in 7 to the Cardinals.

Williams began his baseball career as an outfielder for the Brooklyn Dodgers. Signed in 1947, he played 4 seasons in the minors, then played for Brooklyn as a spare outfielder from 1951 to 1954.

Dick spent all of 1955 and part of 1956 in the minors. After only 7 games with the Dodgers in 1956, Williams was claimed off waivers by the Orioles, and became their regular center fielder for the remainder of the season. 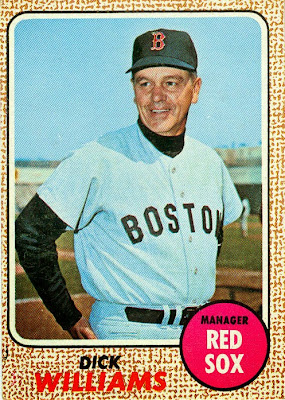 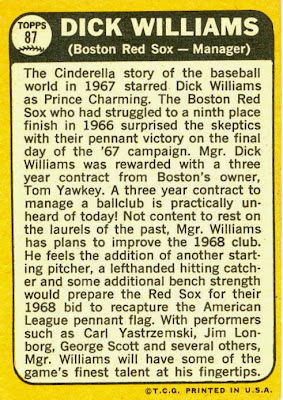 In mid-June 1957, Williams was traded to the Indians, who then traded him back to the O’s a few days before the start of the ’58 season. After just one season back in Baltimore (this time as a swing man between 1B/3B/CF), he was shipped out to the Kansas City Athletics.

Williams played for the A’s in ’59 and ’60, starting about half the team’s games at 3rd base or 1st base. In 1961, Williams was traded on the 2nd day of the season to ... (anyone?) the Orioles! Now in his 3rd stint with the team, Dick shared the left field job with Russ Snyder, while also making the occasional start at 1st base. 1962 would be his last in Baltimore, and he was relegated to a utility role.

Williams wrapped up his playing career with 2 seasons in Boston, playing his final game on 10/1/64.

Dick immediately went into managing, piloting Boston’s AAA Toronto team to first-division finishes in ’65 and ’66. That earned him the Red Sox’ job in 1967, and what a year for the BoSox. Not only did they win the pennant, but Carl Yastrzemski won the Triple Crown, and Jim Lonborg led the AL in wins and strikeouts while winning the Cy Young award.

Williams managed the Red Sox until his firing with a week remaining in 1969. He moved on to Oakland for 1971-73, guiding the team to 3 division titles and 2 World Championships in his 3 seasons. This was all done with players that were famous for not liking each other (or not liking Williams, I don't remember which).

Some of the non-regulars or platoon players didn't like Williams much, but the champion A's were united in their dislike of owner Charlie Finley.