A quick look at the cards of Jim Fregosi, who passed away on Friday. 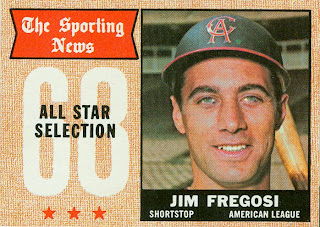 I was a bit surprised that Fregosi was selected to the 1967 All-Star team. Luis Aparicio had the advantage of his reputation, and a 1966 World Series championship behind him, but as the back of Fregosi's base card says, he led all shortstops in 1967 with a .290 batting average. 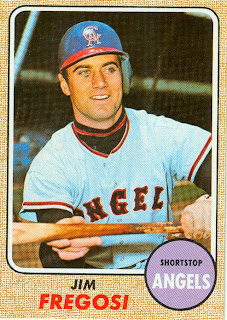 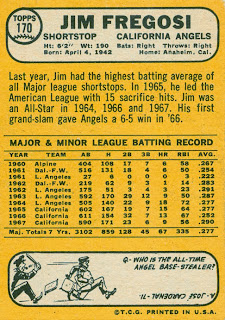 Posted by Jim from Downingtown at 9:40 PM

I started to follow baseball in 1969. It was a down time for the Angels, the handmaiden team to the Dodgers. Fregosi to me was the serious player who could hurt the opposition. He was the leader, on a teams of less than average talent. His cards showed him as sometimes serious sometimes smiling, but always confident and competent.

So while Jim toiled in semi-obscurity. While Dodgers were on prime time TV shows like Mr Ed or the Munsters. Fregosi appeared on the syndicated Truth or Consequences show. My Fregosi memory.