This is the final card for Twins' manager Cal Ermer (#206). Because his major-league playing career consisted of 1 game in 1947, this is also his rookie card. 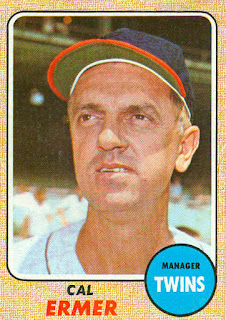 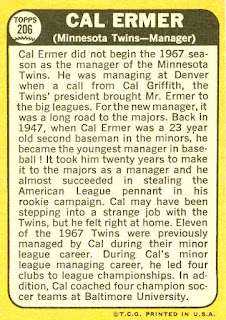 Ermer played minor-league baseball from 1942 to 1951 (except for missing the 1943-45 seasons while in the Marines). Although mostly in the Washington Senators' system, he also played for the Giants, Tigers, and Philadelphia Athletics' organizations, but never progressed above the class-A level.

His one major-league appearance came on 9/26/1947, playing 2nd base for the Senators against the Philadelphia Athletics.

Cal's managerial career began as a player-manager for various class-B and D teams in the Washington Senators' farm system in '47, '50, and '51. From 1952-57, he managed the Sens' double-A team in Chattanooga.

After a year with the Tigers' AA team in Birmingham, he moved up to triple-A, managing the Pirates' team in Columbus for 2 seasons. In 1961, he managed the Yankees' top farm team in Richmond, where his charges included future major-leaguers like Tom Tresh, Don Lock, Phil Linz, Hal Reniff, Jake Gibbs, and Bill Short.

After coaching for the Orioles, Ermer was hired to manage the Twins' AAA team in Denver in 1965. Two and a half years later, he was promoted to the Twins, following the firing of Sam Mele on June 9, 1967. Cal was replaced after the 1968 season by Billy Martin.

Ever the organizational man, Ermer later managed the Twins' triple-A teams in Tacoma (1974-76) and Toledo (1978-84). After his managing days, he became a scout for the Twins.
Posted by Jim from Downingtown at 1:05 PM