Here is the last card for Rocky Colavito (#99), one of the great American League sluggers of the late 1950s and early 1960s.

Colavito started his minor-league career in the Indians' organization back in 1951, and played in such locations as Spartanburg SC, Reading PA, and San Diego (which were all Phillies' minor-league teams by the mid-1960s). He made his major-league debut in September 1955. 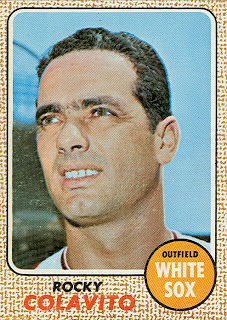 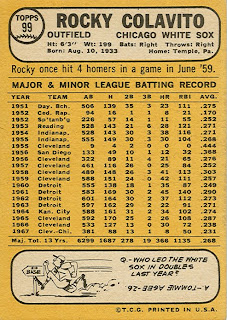 In April 1960, Colavito was dealt to the Tigers for outfielder Harvey Kuenn. He played 4 years in Detroit, followed by 1 season with the Athletics, before returning to Cleveland in February 1965 in a complicated 3-team deal that went this way:

He continued slugging homers in his 1st 2 seasons back with the Indians. In 1967, his production dropped off greatly, and he was traded to the White Sox at the end of July for outfielder Jim King. (This was King's 2nd trade of the season.)

Colavito did not play for the White Sox in 1968, having been sold to the Dodgers in spring training. (This 1st-series card was already printed and in stores by then.) After playing in 40 games, the Dodgers released him in mid-July. The Yankees picked him up a few days later, and he appeared in 39 games before being released at the end of the season, bringing his 14-year career to a close.