Here is Angels’ 2nd baseman Bobby Knoop, at 78 the oldest living player from 1966-70 that I haven’t blogged about yet. (Back in the Sixties, my brother and I thought his name was pronounced NEWP, but it is Kuh-NOP.)

Knoop was signed by the Milwaukee Braves in 1956, and after 8 long years in the minors, the Angels acquired him in the Rule 5 draft after the 1963 season. (Hmm… the record shows he played for the Angels’ AAA team in Hawaii in ’62 and ’63. Maybe he was on loan, and the Angels liked him so much that they acquired him outright.)

Like all other Rule 5 picks, he needed to stay on the major-league roster the following year. Unlike so many, he was a real contributor, playing in all 162 games (starting 156) as a rookie in 1964. 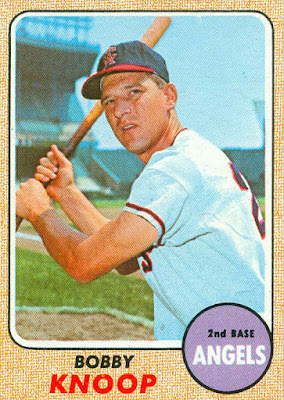 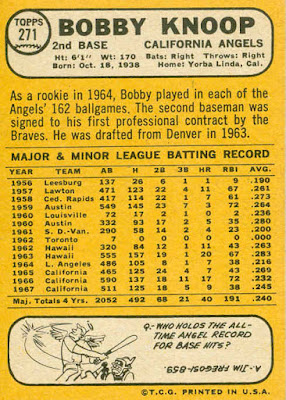 After starting 23 of the first 24 games in 1969, he was traded in mid-May to the White Sox for 2nd baseman Sandy Alomar and pitcher Bob Priddy. Knoop started 100 and 117 games in his 2 seasons with Chicago.

With the Sox having acquired 2nd baseman Mike Andrews from Boston in December 1970, Knoop was traded to the Royals during spring training 1971 for infielder Luis Alcaraz.

Bobby was the backup infielder for KC in 1971, but started 41 games at 2nd base, mostly after Cookie Rojas was lost for the season in late-August. In 1972 he only started 22 times, his final game coming on September 20th.

He was released after the 1972 season, ending his 9-year career.