Moving around the horn, we come to Tim Cullen, the Topps all-rookie shortstop in 1967.

Cullen was signed by the Red Sox in 1964 out of Santa Clara University, and reported directly to triple-A Seattle. After his first season (as a 3rd baseman), he was drafted by the Senators, and played another season and a half in triple-A (now as a shortstop), before he was called up in early August 1966. Tim played 18 games with the Sens over the rest of the season.

Tim made the Senators at the start of 1967, and was a spot-starter at 2B and 3B early in the season. On July 5th, he wrested the starting shortstop job away from light-hitting Ed Brinkman, and started 62 of the final 84 games there.

That was good enough to snag the Topps All-Rookie post, but prior to the 1968 season, Cullen was traded to the White Sox (with pitchers Bob Priddy and Buster Narum) for shortstop Ron Hansen and pitchers Dennis Higgins and Steve Jones. 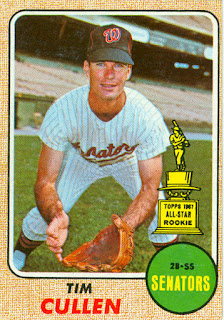 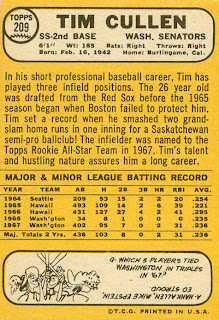 Chicago had also re-acquired shortstop Luis Aparicio from the Orioles in the off-season, so Cullen was installed at 2nd base. Tim held a regular job from day 1 until mid-June, then was relegated to the bench in favor of Sandy Alomar.

By early August, Cullen was returned to Washington in exchange for Hansen. (Cullen and Hansen are the only 2 players to ever be traded for each other twice in the same season.) For the remainder of 1968, and for 2 more seasons, Tim shared the starting 2nd base job with Bernie Allen.

In 1971, he split his starts between 2nd base and shortstop, as the Senators were easing rookies Lenny Randle (2B) and Toby Harrah (ss) into the starting lineup. Cullen followed the team to Texas in 1972, but was released by the Rangers in spring training.

A month later, the Athletics picked him up, and he began his final season in triple-A, before the A's recalled him in late June. Tim and ex-Indians' shortstop Larry Brown split the 2nd base job for the bulk of the season, as veteran A's 2nd-sacker Dick Green missed most of the '72 season.

Posted by Jim from Downingtown at 9:20 PM