Sandy was signed by the (old) Washington Senators in 1957. He spent 8 seasons in Senators'/Twins' minor-league system (including the last 5 in triple-A) before making his major-league debut with the Twins on April 12, 1965.

In his rookie season, Valdespino was 10th in at-bats among Twins players, which was tops among non-starters. (For all practical purposes, the Twins had 9 "starters" that season, because of the triangle of Don Mincher at 1B, Rich Rollins at 3B, and Harmon Killebrew at 1B-3B.) Valdespino was used primarily as a pinch-hitter and backup left fielder.

In 1966, Sandy's value to the team plummeted, as rookies Ted Uhlaender, Cesar Tovar, and Andy Kosco all found more playing time than Valdespino. In fact, he played more games at triple-A Denver (72) than he did with the Twins (52). 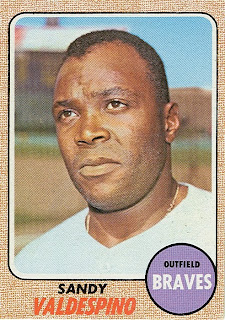 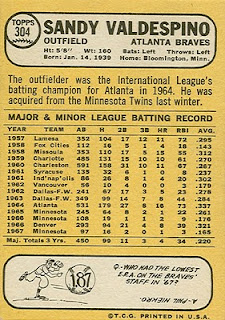 Sandy spent the entire 1967 season with the Twins, but was relegated to the bench. Although he played in 99 games, only 9 of them were outfield starts. The rest were pinch-hitting appearances or backup duty in left field. After the season, the Braves selected him in the rule 5 draft.

1968 was his only season with the Braves, but he played 2/3 of his games that season with triple-A Richmond. After the season, Atlanta traded him to the Astros for pitcher Paul Doyle, a 10-year minor-league veteran with no major-league experience.

After splitting the season between Houston and triple-A Oklahoma City, Sandy was traded to the Seattle Pilots on August 30, 1969 (with Danny Walton) for Tommy Davis. Valdespino played 20 games with the Pilots at the end of 1969, and although he played 8 games with the relocated Milwaukee Brewers in 1970, he spent most of that season in the minors, first in Portland Oregon, then in Omaha (after being sold to the Royals in July).

His final major-league games was on September 28, 1971, but he never appeared on a baseball card after 1968.
Posted by Jim from Downingtown at 11:25 PM