Another hatless gem from Topps. Here, Gene's most likely in a Braves uniform. Since he was only on the Phillies for half a season, surely Topps didn't find the time to photograph him!

That status was short lived, as in 1963, a 21-year-old upstart named Tim McCarver took over the Cardinals' catching job for the remainder of the decade. Oliver was traded to the Braves in mid-season for pitcher Lew Burdette. In Milwaukee, he became the team's #1 first baseman in 1963 and 1964, sharing the position with Joe Torre. (Joe was the Braves' starting catcher, but would play first base whenever the 2nd-string catcher started.) 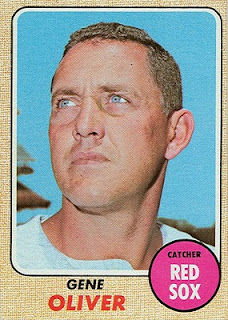 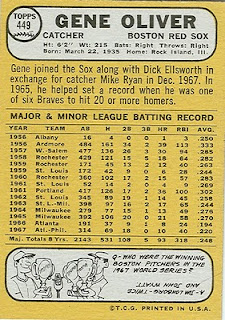 With the Braves' acquisition of Felipe Alou in 1965, Gene was relegated to 2nd-string status at both catcher and first base, but still made 107 starts between the 2 positions.

In 1966, Gene was pushed further into the background. Although he played in 76 games, only 48 were at catcher and 5 at first base. That's a lot of pinch-hitting! (I just discovered that outfielder Rico Carty caught 17 games for the Braves in 1966! Maybe Oliver was injured for a time.)

In June 1967, Oliver was traded to the Phillies for catcher Bob Uecker. After only playing in 12 games for Atlanta, Gene started 72 games for the Phillies (70 at catcher and 2 at first base) as the righty half of Gene Mauch's catching platoon.

After the 1967 season, Oliver and pitcher Dick Ellsworth were sent to the Red Sox in exchange for young catcher Mike Ryan, a "defensive specialist". There wasn't much room for Gene in Boston, what with 2nd-year starter Russ Gibson, long-time veteran Elston Howard, and journeyman Russ Nixon also lurking about, so he was sold to the Cubs in late June 1968.

Oliver was used mostly as a pinch-hitter in 1 1/2 seasons with the Cubs. He was released on September 2nd, 1969.
Posted by Jim from Downingtown at 9:59 AM