Ray Sadecki was a starting pitcher for the Cardinals and Giants in the 1960s. He later played for the Mets and several other teams.

Ray was signed by the Cardinals in 1958 and made his big-league debut with St. Louis in May 1960. At age 19, he was the team’s #3 starter behind Larry Jackson and Ernie Broglio.

In 1961 he led the staff in starts and innings pitched, shared the wins lead with Jackson, and was 2nd in strikeouts to Bob Gibson.

1962 was a down year. By the end of July Ray’s record was 6-8, and he was sent to the minors for the remainder of the season. 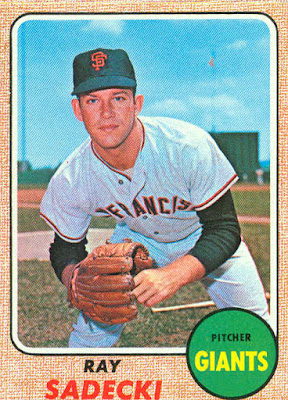 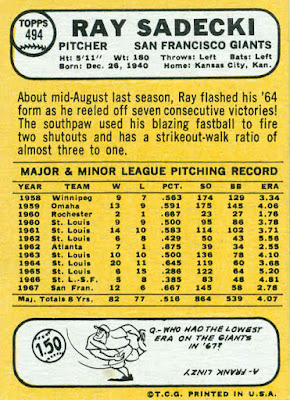 1964 ended with the Cardinals winning the World Series. Along the way Sadecki won 20 games, just slightly ahead of Gibby’s 19 and Simmons’ 18 wins.

In 1965 the Cards’ rotation was reduced from the “Big 3” to the “Big 1” (Gibson), as both Sadecki and Simmons lost 15 games. The following May, Sadecki was traded to the Giants for slugger Orlando Cepeda.

Over the next 3 ½ seasons, Ray manned the #4 spot in the rotation, behind Juan Marichal, Gaylord Perry, and Bob Bolin (and later Mike McCormick). He was 32-39 in his time with the Giants, never matching his success with the Cardinals, but he did win 12 games twice and piled up a lot of innings for the Giants.

Ray was traded to the Mets after the 1969 season with outfield prospect Dave Marshall for journeyman outfielder Jim Gosger and utility infielder Bob Heise. [WOW! What a sad state of affairs!]

After 5 uneventful season with the Mets (used as a starter and reliever), he was traded back to the Cardinals for Joe Torre. After 2 months with St Louis, he was flipped to the Braves, and by Labor Day he was with the Royals.

Sadecki pitched 5 games for Kansas City at the end of 1975, and 3 games at the start of 1976 before he was released in early May. The Brewers soon picked him up, and he relieved in 36 games for the remainder of the ’76 season. Released again, Ray was signed by the Mets in March 1977 but was released on May 2nd, ending his 18-year career.

Sadecki passed away from cancer in November 2014 at age 73.
Posted by Jim from Downingtown at 7:00 PM