Although his debut came with one game in 1963, Bill Landis' rookie season was 1967, with the Impossible Dream Red Sox. This is his rookie card.  His only other card (in 1969) used the same photo.

Landis was signed by the Kansas City Athletics in 1961 (I did not know he was previously with the Athletics), and pitched one inning for them in the last weekend of the 1963 season. Otherwise, he spent 6 seasons in their farm system. 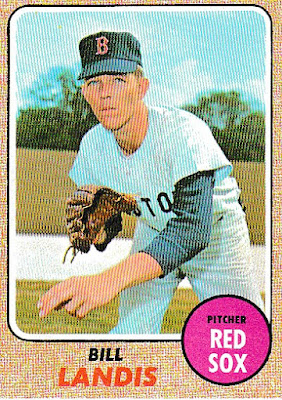 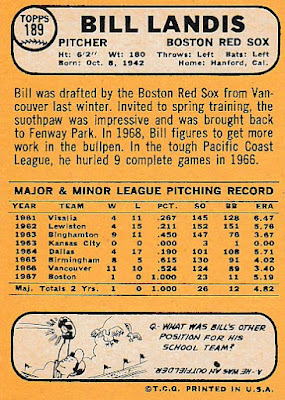 In November 1966 the Red Sox selected him in the Rule 5 draft. He was on Boston’s roster for all of 1967, and had a rough start to his career.

After his June 10th appearance he was only used once until late-July. (The Sox had called up another rookie left-handed reliever in early July, who gave them better results.)

Landis settled down during his 7 appearances over the season’s final 2 months. He did not make the post-season roster for the Sox (nor did Lyle, which is surprising given his 2.28 ERA over 27 games).

Bill pitched 2 more seasons with the Red Sox, and was the 5th man in the bullpen both years, making 38 and 45 appearances. He came down with a sore arm late in the 1969 season, which would affect the remainder of his career.

He played the 1970 season with Boston’s AAA team in Louisville, then was traded to the Cardinals for pitcher Bill McCool that winter.

Landis pitched only 10 innings for the Cards' AAA team in 1971 before retiring.
Posted by Jim from Downingtown at 1:16 AM No comments: Links to this post 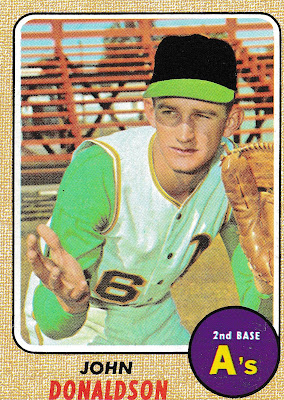 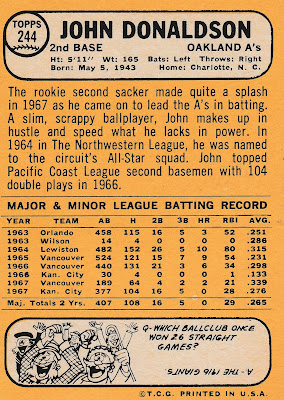 He was released by the Padres in April 1974 and signed with the Athletics. He spent most of his final season in the minors, but did play 9 games for the Athletics in April and May, and one in October.
Posted by Jim from Downingtown at 11:59 PM No comments: Links to this post

This is Rob Gardner’s first card as a member of the Chicago Cubs. I first became aware of him when I got his Mets’ card in the 1967 set.

Gardner was signed by the Twins in 1963 (I did not know that.) After the ’63 season, he was selected by the Mets in the first-year draft.

Rob made his major-league debut with the Mets in September 1965. He appeared in 41 games (17 starts) for the Mets in 1966, more than twice as many games as he played in any other season. 1966 was the only year he did not spend any time in the minor leagues. 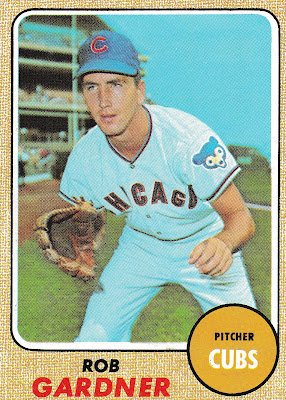 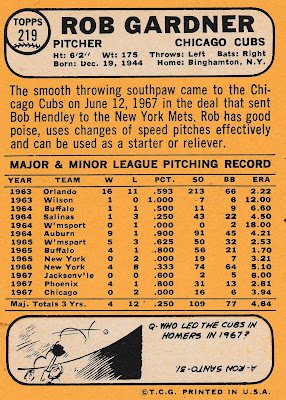 He began 1967 in triple-A, then was traded to the Cubs in mid-June (with catcher JOhn Stephenson) for pitcher Bob Hendley. Rob pitched in 18 games for the Cubs over the second half.

Gardner was traded to the Indians during Spring Training 1969 for pitcher Bob Tiefenauer. He spent most of 1968 and all of 1969 in the minors, only appearing in 5 games for the Tribe in September 1968.

He was traded to the Yankees in June 1969 for catcher Johnny Orsino, but only played 1 game for the Yanks in September 1970.

New York traded Ron to the Athletics in early-April 1971 for Felpie Alou, but 6 weeks later he was traded back to the Bronx for Cury Blefary. He played 20 games for the Yankees in ’72, but spent most of ’71 and ’72 in the minors.

After the 1972 season he was traded BACK to Oakland, this time for MATTY Alou. 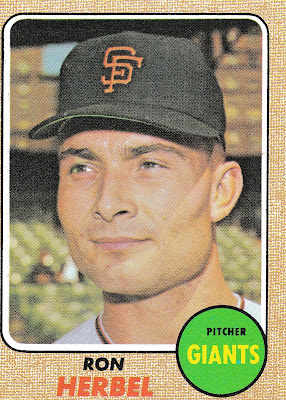 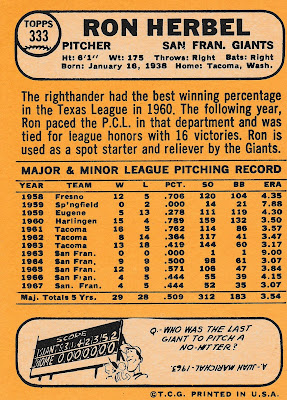 (Why would Topps abbreviate San Fran one way on 4 lines, then change to another way?)

After the 1969 season he was traded to the Padres with catcher Bob Barton and 3rd baseman Bobby Etheridge for pitcher Frank Reberger. Ron notched 9 saves with San Diego, then on September 1st he moved on to the Mets. He led the National League in 1970 with 76 appearances.

In December he was flipped to the Braves for 3rd baseman Bob Aspromonte. Herbel was the 11th man on Atlanta’s pitching staff in 1971, and was released the following spring.

He was picked up by the Twins but spent 1972 playing for their AAA team, never to return to the majors.

A notoriously bad hitter,  his .029 career batting average is the lowest in major-league history for a player with at least 100 at-bats.

Dick Kelley was signed by the Milwaukee Braves in 1959, and made his major-league debut on April 15, 1964. In that game he had the misfortune of giving up 4 earned runs while facing 5 batters (2 hits, 3 walks) but recording no outs, so his zero innings pitched resulted in the dreaded ERA of "infinity".

He spent the rest of the 1964 season in triple A, then returned to pitch 2 innings on the final day of the season. His no-hit/no-runs/no-walks performance LOWERED his ERA for the season to 18.00. 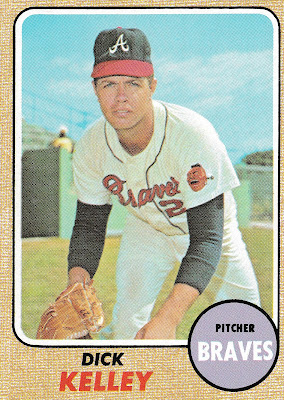 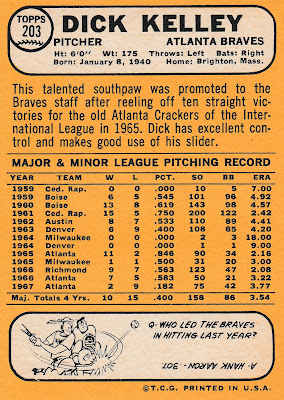 Kelley divided his time between the Braves and their AAA team in '65 and '66.

He pitched 98 innings for the Braves in both 1967 and 1968, but that was not enough of an impression to keep him off the expansion draft list. The Padres selected him in the post-1968 draft.

Kelley returned to the Padres in 1971 as a reliever, and made 48 appearances (a career high) in his final season.

He pitched 9 games for the Rangers’ AAA team in 1972, before retiring.

Posted by Jim from Downingtown at 11:35 PM No comments: Links to this post

This is Ed Stroud’s first solo card.  He previously appeared on a White Sox Rookies card (with Walt Williams) in the 1967 set.

Stroud began his career in the White Sox organization in 1963. His nickname of “Streak” was due to his stealing 74 and 72 bases in his first two minor-league seasons! After 4 seasons in the minors, he made his Sox debut in September 1966. 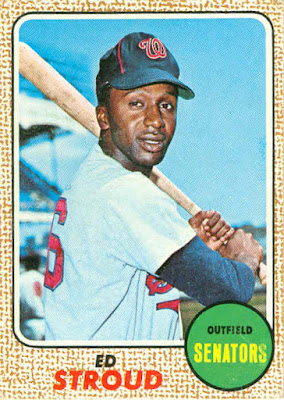 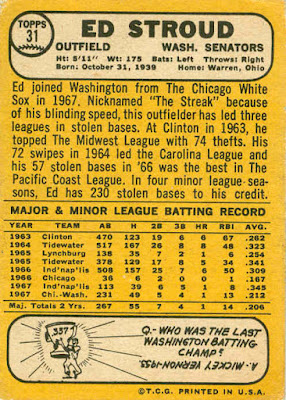 In mid-June 1967 he was traded to the Senators for veteran outfielder Jim King. (The first of King's two trades that season.) It was a good move for Stroud, who was stuck behind Tommie Agee, Ken Berry, Pete Ward, and rookie Walt Williams in the Sox’ outfield.

Ed played 79 games in center field over the 2nd half of the ’67 season, sharing the starts with Hank Allen.

In 1968, rookie Del Unser took over the center field job, so Stroud moved over to the right field mix with Cap Peterson, Fred Valentine, and others. Ed led the pack with 52 starts. He also played in left field occasionally when Frank Howard was at first base.

The arrangement in 1969 was much the same as in ’68, except now Ed had Lee Maye above him in the pecking order.

1970 was a career year for Stroud. Unser was limited to 100 or so games, and half of them were in right field for some reason. Ed was the primary center fielder that year, starting 95 games. He had career highs in hits (115) and stolen bases (40).

All that quality play in 1970 got him a ticket out of Washington, as he was traded back to the White Sox for 1st baseman Tom McCraw during spring training in 1971. Stroud played in 50+ games over the first half (rarely starting) and by midseason he was back in the minors, and retired after the season.

Here is outfielder Steve Whitaker, in his last season as a Yankee.

Whitaker was one of a long line of Yankees' outfielders (along with Roger Repoz, Bill Robinson, Roy White, Bobby Murcer, and Jerry Kenney) who were touted as, if not the next Mickey Mantle, then the next Roger Maris or surely the next Tom Tresh. (Only White and Murcer panned out for the Yankees. ) 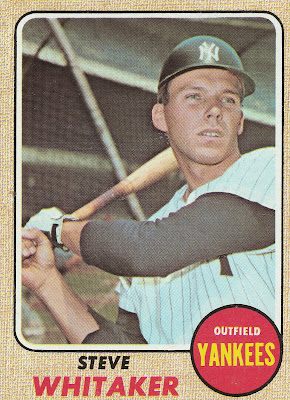 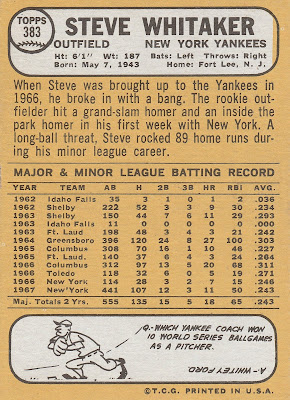 Steve split the 1968 season between the Yankees and triple-A, then was selected by the Royals in the expansion draft.

During spring training in 1969, he was traded to the Seattle Pilots for disgruntled rookie Lou Piniella (who went on to win the Rookie of the Year award). Whitaker didn’t fare as well as Piniella. He couldn’t find regular work with the expansion team, and was used mostly as a pinch-hitter, while also spending all of August back in triple-A.

After the 1969 season he and outfielder Dick Simpson were traded to the Giants for pitcher Bob Bolin. He only played 16 games for the Giants (the last on May 9th) and played the remainder of 1970 for the Giants’ AAA team.

Whitaker played for the Padres’ AAA team in Hawaii in '71 and '72 before retiring.

Posted by Jim from Downingtown at 11:51 PM No comments: Links to this post

Top 20 players not yet blogged